You’re going to flip out over this bacon wrapped shrimp recipe. I mean it has bacon, shrimp and jalapeno… how could this get any better? The perfect appetizer for any dinner party. Stick with me to learn how to make it right in your kitchen! 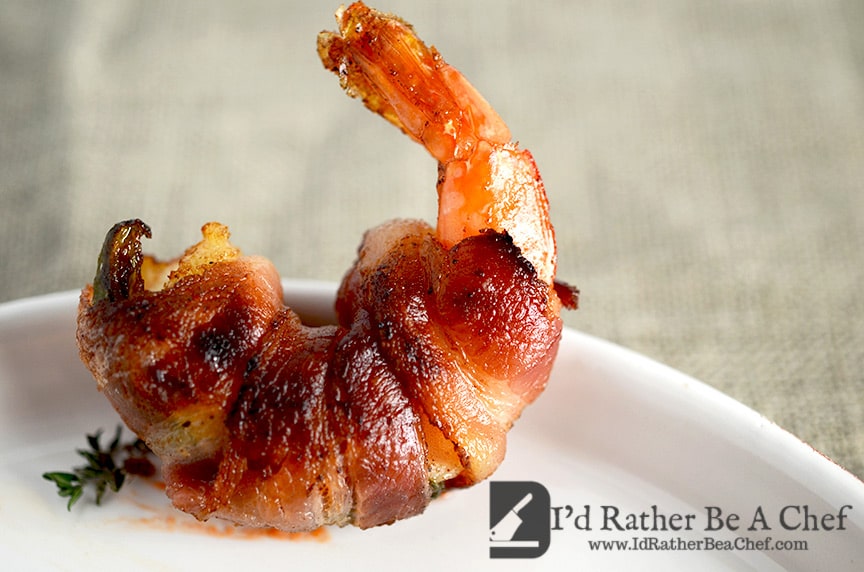 A couple nights ago I went out to a Mexican restaurant with a good friend of mine.  Out of that evening came two really cool recipes.  The first was the Fajita Frittata, which was delicious.  The next is this bacon wrapped shrimp.  I’ve never seen bacon wrapped shrimp at a Mexican restaurant before.  Where we were at, it was just shrimp with bacon that they then deep fried.  It was served with orange slices and a spicy mayo.  The orange slices were unique, but I didn’t like them with the bacon.  The spicy mayo was completely unnecessary.  Overall, their bacon wrapped shrimp were good, but I knew we could make them better.

For this bacon wrapped shrimp recipe, I didn’t want to fry the shrimp.  I understood why the restaurant did it: they needed to fully cook the bacon.  There is no other way to cook bacon fast enough without overcooking the shrimp.  That is, unless you bake off the bacon first until it is just cooked but still soft.  Then all that is needed is to cook the shrimp and crisp the bacon, which is actually really easy to do.

My friend John said that if he were to make these, he would maybe add in some jalapeno.  I called Caroline and asked if she would pick up a couple jalapenos on the way home, which she did.  After removing the seeds, they were sliced about 1/8″ thick and roasted in the oven with some olive oil, salt and pepper.  When they were soft and delicious, they were put on the counter to cool so they could be handled easily.  What a great flavor combination- nice work John.

WHICH SHRIMP ARE SAFE TO EAT?

My suggestion is to only buy shrimp from the USA.  There are too many disturbing reports about shrimp from Vietnam.  Check out this disturbing video of shrimp being injected with carboxymethyl cellulose, glucose and gelatin. We work hard to find Pink Gulf Shrimp with the shell and tail on.

HOW TO CLEAN SHRIMP TO EAT

There are a couple steps for cleaning shrimp to eat:

QUICK COOKING TIP:   It takes a couple minutes to clean shrimp, but it is important to do.  Cleaning the shrimp will not only will this result in better tasting shrimp, but the roasted jalapeno fits into the area where the vein was located really nicely!

Wow, this bacon wrapped shrimp recipe is tasty.  Let’s get to it- 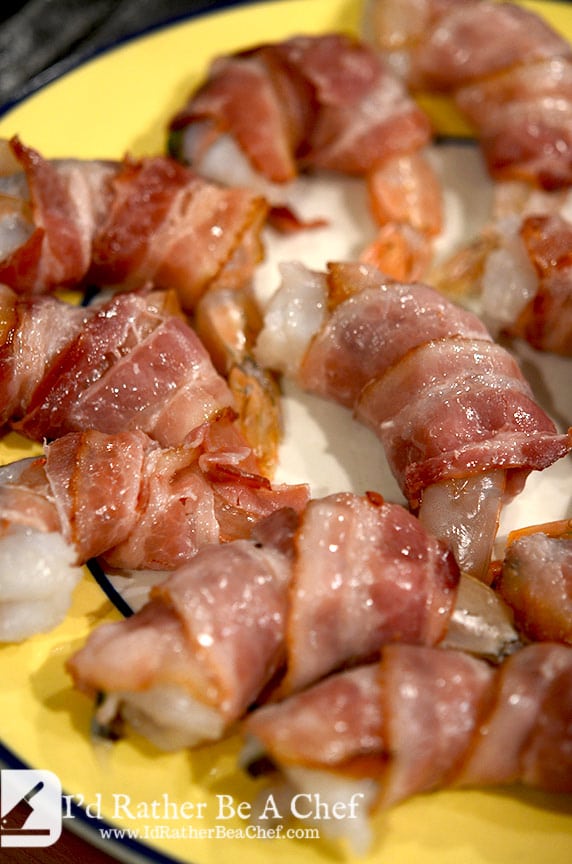 For the Roasted Jalapenos

Preparing the shrimp to cook

Learn how to Cook Bacon in the Oven!

Final Thoughts on the Bacon Wrapped Shrimp with Jalapeno Recipe:

Ok.  So this bacon wrapped shrimp can be used as an appetizer.  A delicious appetizer.  It can be put over some creamy, Southern style grits.  Try it with a watercress salad, sliced avocado and lemon vinaigrette dressing.  Whatever you want to use it in, it is going to be fantastic.

Just keep in mind that cooking the bacon soft enough so it is still pliable is important.  No toothpicks are needed if you just fold the end under on of the previous wraps.  You will then crisp up the bacon when it is being sauteed in the butter.  This recipe is just so good, you have to give it a try.

If you want my soul satisfying Southern style grits recipe (I’ve been told by at least a dozen people they are the best they have ever had), drop a line in the comments and I’ll get it to you.  With this bacon wrapped shrimp, it is a match made in gastronomy heaven.

Also, check out the recipe post our friends over at StupidDOPE put together!