Home » How to restart a low carb diet

We’ve all been there before. Things were going so well and then… they weren’t. If you’ve fallen off course with your low carb or keto diet, keep reading. This has happened to me before and I’ll show you how to restart a low carb diet easily.

How to restart a low carb diet today

I’m just going to jump right into how to restart your low carb or keto diet today… and then get into my own personal story explaining what happened to me.

Here are the 5 Easy Tips on how to restart a low carb diet:

Maintaining a strict low carb or keto lifestyle is sometimes hard. If you keep focusing on the fact that you have gone off course… guess what? You’ll keep going off course.

You can CHANGE YOUR LIFE right this instant by simply choosing to do so. Instead of focusing your energy on what has gone wrong, refocus your energy to do exactly what is right for you!

One way to immediately get back on course is to make sure the next thing you put in your body is 100% low carb or keto.

Then celebrate the fact that you’ve just restarted your low carb diet, because you have. 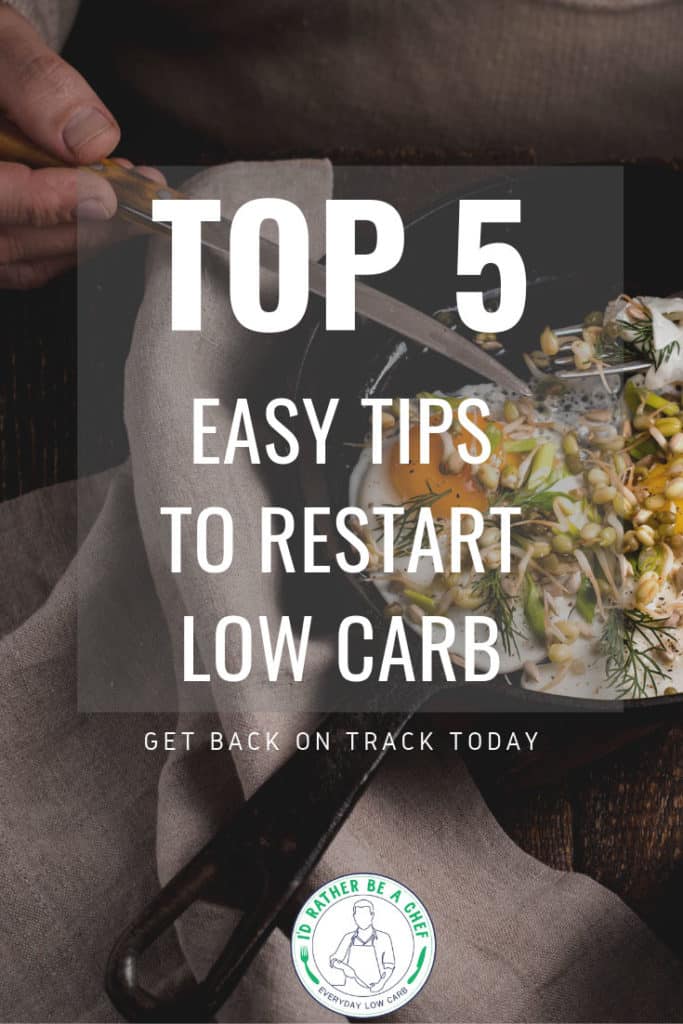 Step 2: Reflect on what happened

We have to remember to be compassionate with ourselves. Reflect on what started the slide off of low carb or keto. Here are a few questions to ask yourself:

Remember if you’re not giving enough time to yourself to make you feel exactly how you want, then everything else becomes harder.

Also, when you’ve gone to bed late for a few nights in a row (burning the candle at both ends) things can really get out of hand quickly. 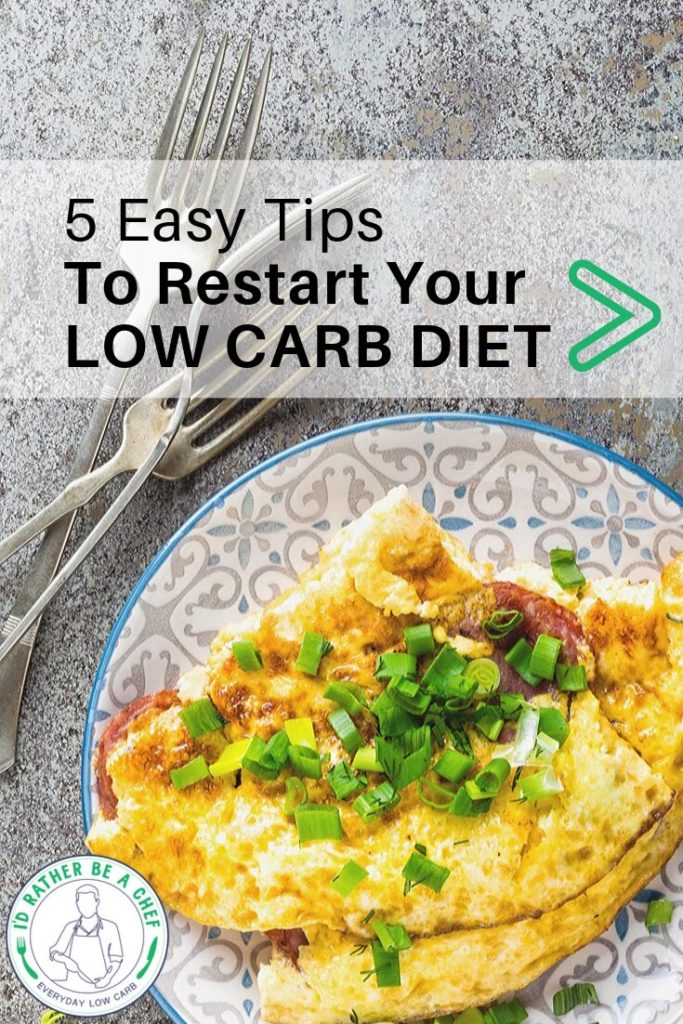 If you really want to restart your low carb diet, let’s start with a small commitment. Two days. That’s all you need to get a jumpstart back onto the program.

If you’re having residual cravings (which is often why I’ve lost my way eating low carb), the best way to squash them is by being strict with yourself for just two days… you’ll be amazed by how quickly those cravings disappear after two days.

Once you’re past the 48 hour mark, you’ve typically gotten back to your happy, low carb rhythm or have built up enough momentum to keep it up a little longer.

Don’t stress yourself out about the rest of your life. Concentrate on 2 days only!

Living low carb or keto really does require support in my opinion. If you’ve fallen off your low carb diet and need to get it restarted today… then call a friend, your spouse or anyone who will give you that positive support.

The first thing to do is say that you’ve messed up! Release that negative energy and get it out of your system.

Next, state your intentions. Let the person know that you intend to be strict on restarting your low carb diet for the next 48 hours.

Lastly, ask if it is okay for you to check in with them to be accountable and to help lift your spirits if you need it.

I’ve been amazed with how many people have supported me through my darkest hours when I’ve asked them to help.

See how low carb worked for me

The struggle is real. See my 30 year weight loss journey in 3 minutes. LOW CARB transformed my life.
Click to View

I tend to dwell on the fact that I’ve fucked up. I keep beating myself up about it and wishing that things happened differently.

Ever feel this way? Well, life happens and things will get in the way of our overly-high expectations we place on ourselves.

Here’s my last piece of advice and I find it to be the hardest one to follow: Move the fuck on.

Stop wasting time trying to change the past. Instead, refocus on the future and restart your low carb diet today. If it is what you want, then make it happen.

As of the date of this article, I’ve been eating low carb for two years, one month and eight days.

I’ve had a number of slips and falls along the way, but I’ve always treated them as learning experiences. Until…

In August 2019 I completely fell off the low carb wagon. I gave up. It felt too hard, I was stressed and had cut off a huge support network which I relied upon.

I became an absolute train wreck. Once I was off the wagon, I figured I would party like it was 1999.

Here’s how I restarted my low carb diet:

Step 1: I refocused my energy. On September 1, I knew it was time to refocus my energy. I felt like shit, looked worse than I felt and had zero motivation. In that instance I made a decision to take care of ME.

Step 2: I made time for myself. I cleared my schedule and made time to figure out what happened. I was kind to myself, asked a ton of questions and really paid attention to the answers. It was HARD.

Step 3: I committed to 2 days of strict low carb. I cleared out everything from the cabinets which were my comfort foods. I planned out my meals and even started back in on the bulletproof coffee.

Step 4: I reached out to my friends and family. I told them how I was feeling. I explained what happened (how for an entire week I almost never left the couch as I was binge watching TV and stuffing my face with everything I could think of).

Just saying these things to my friends made me feel so much better. Then I told them my plan. Everyone was in agreement and supported me.

Step 5: I had to let go. I have no idea how much weight I gained in that month, but it was enough so that my clothes felt tight again. There is more chin than I want. The list goes on. And on.

Guess what? I succeeded at low carb once and I’ll do it again. No sense dwelling in the past. Whatever happened must have happened for a reason. Maybe it was to write this article to help other people?

Let that shit go and focus on the moment you’re in now. 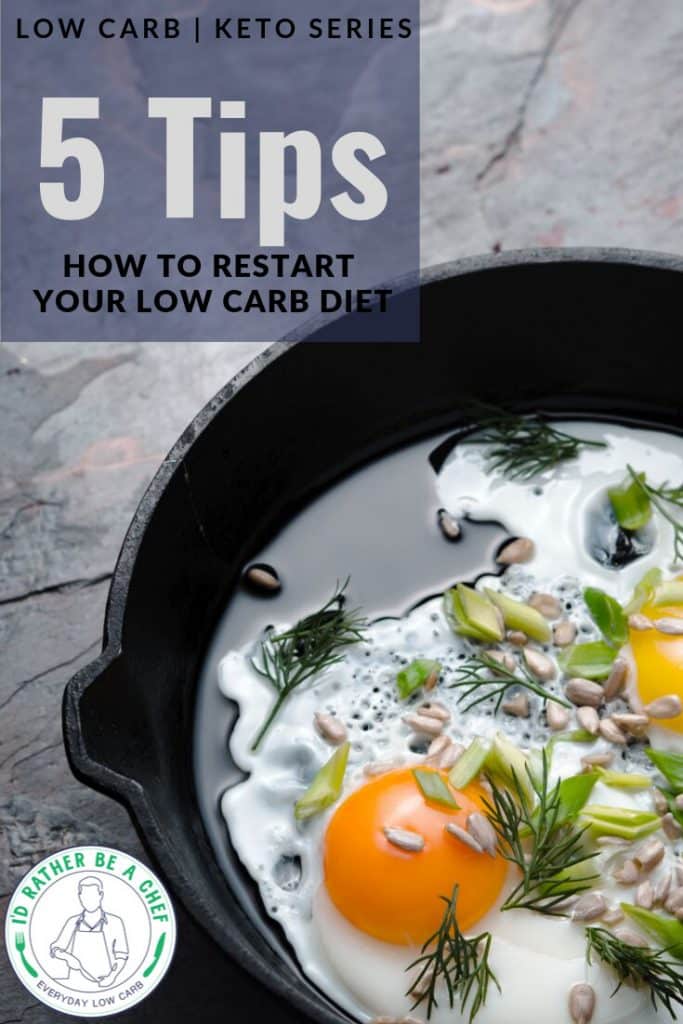 Hopefully this article on how to restart a low carb diet was helpful for you. If you liked it, here are some others you might want to check out.

I weigh in on the Low Carb High Fat diet, including some interesting history along with benefits and what to watch out for too.

I spoke with our nutritionist, Cara Halber, about Digestion and Low Carb… which is a really interesting conversation.

Additionally, if you have a family you might want to see about the Low Carb Diet for Kids. There is a ton of information in this article.

As always, if you’re planning on changing your diet or lifestyle, please check with your physician first.