Have you thought that making homemade mayo was just too much trouble? This recipe for Homemade paleo mayo is so incredibly simple you’ll never buy that jarred stuff from the store again.

Having run a cooking school, I’ve seen a ton of different ways to make homemade mayo. Typically they fall into the following methods:

This next section is the most important of all… and was shown to me by a good friend several years ago.

Ok. Here is THE SECRET TO HOMEMADE MAYO: Break the traditions. Don’t separate the egg yolk. No need to drizzle anything. Add the complete egg (without shell), mustard, extra light olive oil and seasonings into your immersion blender cup. Blitz and eat. It’s just that simple. 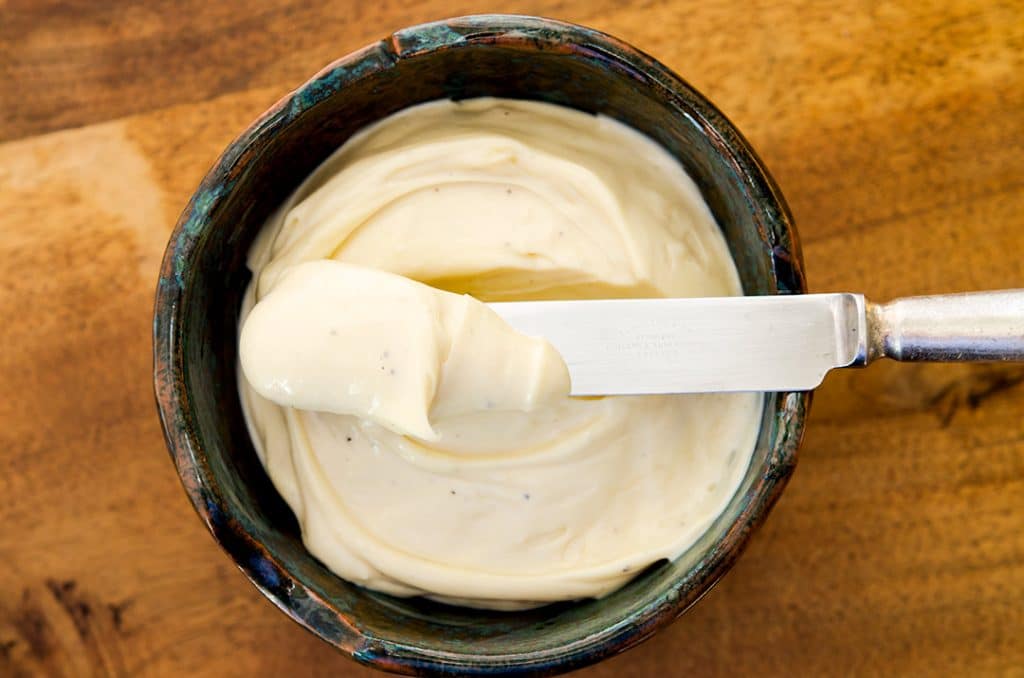 Here’s what NOT to do when making mayonnaise at home: Do NOT use really flavorful, fruity olive oil. It will taste disgusting when you make it. Super bitter and really unpleasant.

If you’re looking to make mayo that is not paleo, go ahead an use sunflower oil. It is relatively flavor neutral, inexpensive and will emulsify like a champ. Want just a touch more flavor? Add in just a bit of olive oil for more richness.

This recipe for paleo mayo is. Most store bought mayonnaise is not.

If you look at the ingredient list on the side of store bought mayo, you’re going to find a few things that are a “no-no” for paleo.

So what about the Olive Oil mayo. Shouldn’t that be better to eat? Nope. Same stuff in there, just without the soybean oil.

RECIPES TO TRY WITH MY PALEO MAYO:

Got any recipes that you love with homemade mayo? I’ll be posting up more soon, but let me know your thoughts!

Adding Thickness: If your mayonnaise is coming out a little too thin, go ahead and add some more oil first to see if it thickens. If not, add 1 more egg yolk and about 3/4 cup of oil (depending on how much you have already added). If you want to add some more mustard, salt and pepper that is completely up to you. Your mayo will now be SUPER THICK.

Adding Flavors: I love to add flavors to mayonnaise. Here are a couple of my favorites.