This no bake cheesecake recipe is: Gluten Free, Vegetarian, Low Carb has No Added Sugar and is Light as a Feather. 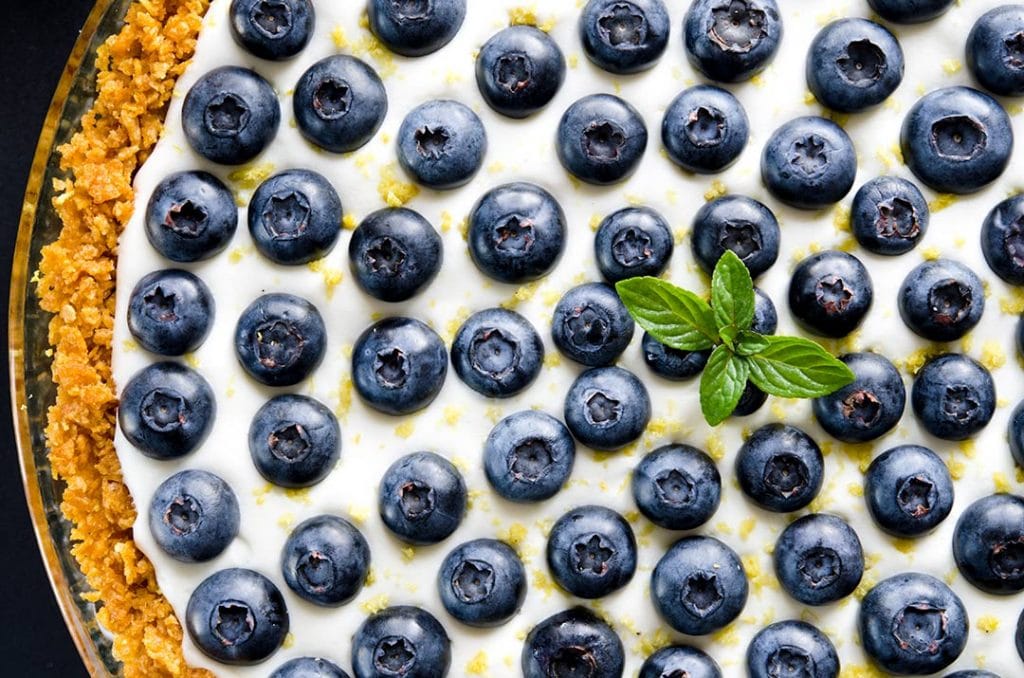 AN EASY NO BAKE CHEESECAKE

When I was growing up, my Aunt Mar used to make us the most incredible cheesecakes. I have no idea how she made them so flavorful and just so perfect every time. I remember that they were absolutely HUGE with the crunchy crust only on the bottom. I think that she used a springform pan and lined the rim with parchment paper. They were just magic to me. The days when she walked into our house with her massive cheesecake tupperware in hand were always good days. She made traditional, chocolate and my favorite was her cookies and cream cheesecake.

Since then I have always measured a cheesecake by the almost impossible standard Mar had set. I rarely order cheesecake at a restaurant. Most are not house made but are brought in from food purveyors… made in some factory somewhere. Restaurant cheesecake is typically dense with a nasty crust. No thanks.

Sometimes at good restaurants I’ll ask about the cheesecake. If our server’s eyes light up, I’ll give it a shot. That happened to me recently here in France in a little port town called Cassis. I decided to take the plunge into a lemon cheesecake.

What arrived at our table was unlike any cheesecake I had ever seen. It was absolutely beautiful. You could tell whomever made it took pride in their work. The base was an oval shortbread crust with just the right amount of crunch and sweetness. The cheesecake filling had been piped on top of the shortbread. It was a beautiful shade of pale yellow. The texture was like eating a cloud. My mind was blown.

This recipe is offered in honor of the Chef who changed my cheesecake standard forever.

I’ve been making this pie crust for a while now and it is really tasty. My suggestion is to pick up some corn flakes that are non-GMO. Since I am living in France currently, there are limited options for corn flakes.  I take what I can get. Just make sure that the corn flakes don’t have added sugar or other stuff like dried fruit.

Some people might ask why I would make a crust out of corn flakes. Well, I have a distinct dislike for just about any prefab gluten free pie crust. They’re just not very good and are full of starches. With a homemade crust, I can also add in some sweetness with the honey and a touch of savory with the butter. You’ll see that it tastes every bit as golden and delicious as it looks.

PLEASE NOTE: while I’m in France, I don’t have a food processor. I’m not complaining, but to make this crust not fall apart the corn flakes need to be run through a food processor to get small enough. I bashed mine with a mallet for a couple minutes, but they were still on the large size. If the flakes in the crust are too big, they won’t adhere to one another well and tend to fall apart. That being said, the larger flakes also added to the light and airy feel of this cheesecake!

Let’s talk about how we can flavor this cheesecake. Obviously from the title and recipe, I made a lemon no bake cheesecake. Don’t love lemons? Ok. We can change the flavoring fairly easily. How about a key lime no bake cheesecake? Oh that sounds good to me. If you want to make a raspberry, strawberry, peach or poached pear cheesecake… all you have to do is swap out the lemon juice.

Ok. There’s a little more to it than that. If you have a juicer (not a vitamix) then making peach, pear, apple or whatever is really much easier. If you’re looking to purchase a juicer, one of my favorites is the Breville Juice Fountain.

If you don’t have a juicer, we can make a simple syrup (1/2 water, 1/2 sugar) and add the fruit. Basically just heat the simple syrup in a pan, add in the fruit and allow it to poach for about 30 minutes. The syrup will take on the flavor of the fruit and be delicious in the cheesecake.

If you’re not into making a syrup, we can make a fruit coulis. Here’s how to make a simple fruit coulis:

Either option adds sugar to this recipe… I’m sure there are other ways to get delicious fruit flavor into cheesecake too. These are just some suggestions!

QUICK COOKING TIP: Although this cheesecake can be ready to go right after adding on the blueberries… it really does best if you can refrigerate it for a couple hours before serving. Here’s why: as we are mixing the vanilla whipped cream and the cheesecake filling they are heating up from the electric mixer.

Basically they become more viscous and need to cool down just a bit to firm back up. That being said, if you’re in a hurry and need to eat right away it will still taste incredible. It will just be a bit less firm. In my opinion, a cold cheesecake is the best cheesecake though. Food for thought.

For the Gluten Free Pie Crust

For the Vanilla Whipped Cream

For the Cheesecake Filling

For the Cheesecake Topping

For the Gluten Free Pie Crust

For the Vanilla Whipped Cream

For the Cheesecake Filling

Making the no bake cheesecake

If you have time or plan on transporting this cheesecake, make sure that it has time to chill. All the ingredients heat up when they are mixed and will firm up really nicely in the refrigerator.

If you want to add on some strawberry or raspberry coulis… that would be fantastic. Coulis is easy to make! Check out how in the blog post attached to this recipe!

FINAL THOUGHTS ON THE LEMON NO BAKE CHEESECAKE RECIPE:

I don’t post up a ton of desserts on the blog. Not that I don’t like dessert… don’t get me wrong. I love dessert. The problem is that usually when I am making dessert it is for a dinner party or a holiday gathering. I find that it is really difficult to put a piece of pie BACK into the pie plate after I’m done taking pictures. I am a firm believer that our guests should be treated with the full experience… and presentation is a huge piece of the pie. Pun intended. With my Homemade Peanut Butter Cups it was easy to take the pictures. Check this recipe out. You’ll love it.

For the lemony cheesecake, I wanted to put pen to paper before the visceral experience of the cheesecake in Cassis dissipated from my sense memory. Making this dessert wasn’t an option for me… it was a necessity. And what a wonderful outcome.

My lemon no bake cheesecake was just as light and airy. I like the corn flake crust more than the shortcake. The addition of the blueberries really added a nice twist and levels out the lemon flavor. I’m not sure how the Chef made such a wonderful yellow color to their cheesecake filling. I’ll find out next time I try it.

What kind of cheesecake is your favorite? New York? Expresso? Cookies and Cream? However you love your cheesecake, I hope that you enjoy this recipe as much as we do. Happy eating.