You’ve found a recipe for tender, juicy stuffed chicken breast smothered in a creamy mushroom sauce. We will be using a simple technique to stuff the chicken breasts with goat cheese and rosemary. When all the components of this recipe come together, the harmony they create will be music to your mouth! 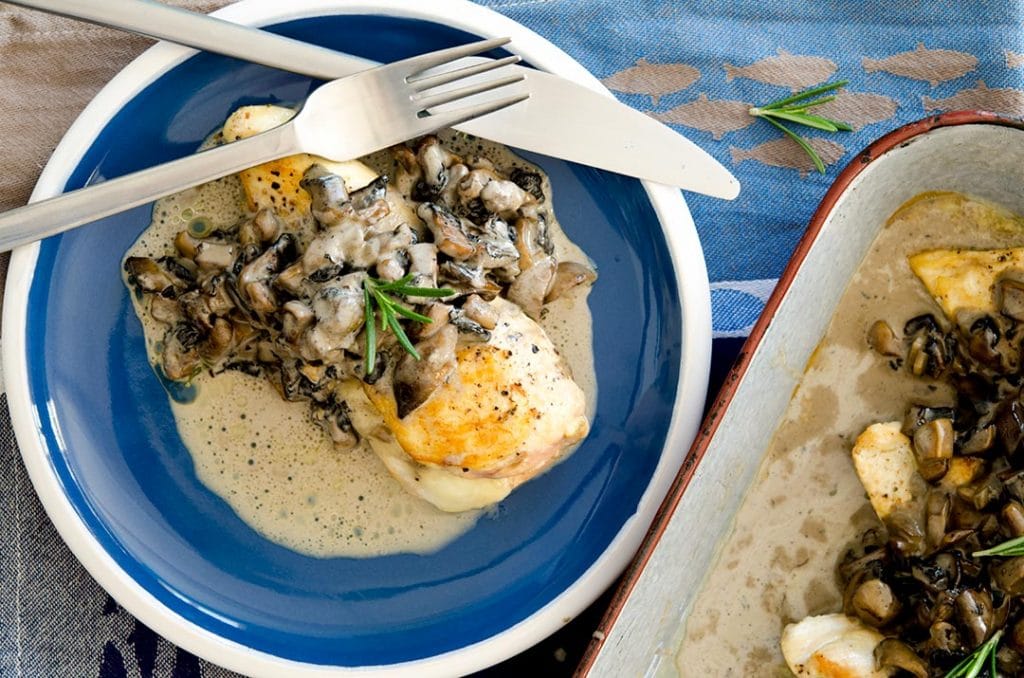 Over the years, I’ve tried to make a lot of stuffed chicken breast recipes. Some have ended up better than others. I remember way back when I was fresh out of college… I thought that I would stuff three cheeses and some bacon into a chicken breast. Let’s just say that at that point in my cooking career I thought dental floss was an acceptable substitution for cooking twine. Nothing quite like spearmint spiked chicken.

Since those days I’ve tried so many different ways to stuff chicken. I’m sure you have as well. For a while it was all about toothpicks. My poor chicken looked like the unsuspecting victim of a voodoo practitioner. Not only are toothpicks hard to install, they are also hard to maneuver in the pan. After a while, I became quite skilled in threading toothpicks artfully through chicken but it took forever.

I then moved onto cooking twine, looping glorious half hitches and feeling proud of my new found trussing prowess. They looked good, but the twine always gets stuck in the chicken. Bummer. The story goes on an on until one of the chefs at my catering company was making stuffed chicken breasts for about 100 people. I watched what he was doing intently… and it was so simple. The first step is to butterfly the chicken. Next, lay in the proper amount of ingredients. The last step is to fold the chicken over the ingredients. Wow. Mind blown.

The key, I was told, is the proper amount of ingredients. Too many chefs try to stuff too much stuff in there. With just enough, the chicken will brown nicely without the stuffing falling out. Since then, stuffed chicken has been almost too easy.

Yes, please! There’s nothing quite like a really delicious mushroom cream sauce. Really any cream sauce, in my opinion, is delicious. I think that cream sauces have gotten a bad rap in the last decade. I get it… they aren’t the most healthy to make. But we’re not eating them every day. And they taste so good. Let’s look at why they taste so good.

Most cream sauces are made from the browned bits (fond) or pan drippings. So it’s like starting with concentrated flavor nuggets. Then we add in cream and butter. What could be better than concentrated flavor nuggets swimming in a pool of buttery cream? Not much. Add in a touch of acid… whether it is vinegar, mustard or lemon juice and the heaviness starts to fade into the background. What we are left with is golden deliciousness. Nectar of the gods.

One of my most popular recipes is Oven Baked Chicken Legs with Creamy Mustard Sauce. Even if you don’t want to make the chicken legs you’ll find the sauce is delightful on pork, steak, fish… just about anything savory. So yummy. I hope you check it out. And yes, some of the ingredients are decadent. But that’s the point sometimes… right?

One of the most important steps in this recipe is sauteing the chicken breasts. Here’s the scoop: when we saute the chicken, flavor builds in the dish. Chicken goes from blah to BLAM in minutes. Here are a couple tips for making delicious sauteed chicken breasts:

For this recipe, we are not going to be cooking the chicken all the way through during the saute step. We just want to build flavor. The chicken will finish cooking in the oven. If you’re looking for a recipe where we saute the chicken completely, take a look at my Sauteed Chicken Breast with Zucchini Medley post. Super delicious and easy to make meal.

The best part about sauteing the chicken before making the mushroom cream sauce is the fond (the browned bits at the bottom of the pan from the saute process) will really add flavor to the mushrooms. Delicious.

QUICK COOKING TIP: You may “par cook” the stuffed chicken breasts ahead of time. Here’s how to do this:

You can easily prepare the creamy mushroom sauce ahead of time as well. When it is time to reheat, make sure that you are using a skillet and NOT the microwave. The mushrooms will not stay soft in the microwave. As the sauce is heating, you may need to add milk, cream, butter or even a touch of water to thin a bit. Mushrooms are Mother Nature’s sponges and will absorb a lot of the moisture from the sauce.

Wow. As usual I’ve gone on for a while. Let’s take a look at the recipe now and get it on your table.

For the Stuffed Chicken Breast

For the Mushroom Cream Sauce

For the Stuffed Chicken Breast

For the Mushroom Cream Sauce

When cutting the goat cheese, it is helpful to get your knife blade wet under hot water. It will cut easier. I’ve also heard that you can use dental floss to cut a goat cheese log, but I’ve never tried it!

If the mushroom cream sauce thickens too far (or sits for too long, which will cause it to thicken as well) you can add more butter, cream or milk over medium to low heat. Please be sparing with the amount added! Use water only if all other resources are exhausted…

If the sauce doesn’t have enough acid (tastes a little flat), add in just a touch more mustard. Remember that a little goes a long way!!

Recently I went completely over-the-top and served this delightful dish with my Baked Brussels Sprouts Gratin recipe. It was basically a heart attack on the plate, but for reasons other than what you are thinking. Taking a bite of the stuffed chicken breast with notes of rosemary and the funky hit of goat cheese was heart-stoppingly good with the creamy mushroom sauce. Then a bite of the bacon and brussels with yummy gruyere cheese… I almost fell out of my chair.

In all seriousness, it was definitely way too much flavor on a plate. I would suggest a nice side salad with a mustard vinaigrette to serve with the stuffed chicken. The vinaigrette will cut through the cream sauce, making each new bite as delicious as the first. Whatever you decide to serve alongside this yummy stuffed chicken, I hope you love it as much as we do. Happy eating.