If you’re looking for a special mashed potato recipe… you’ve found it. We’re going to make mashed potatoes like you’ve never had before. They are so yummy you will wonder how life has been so good without them! 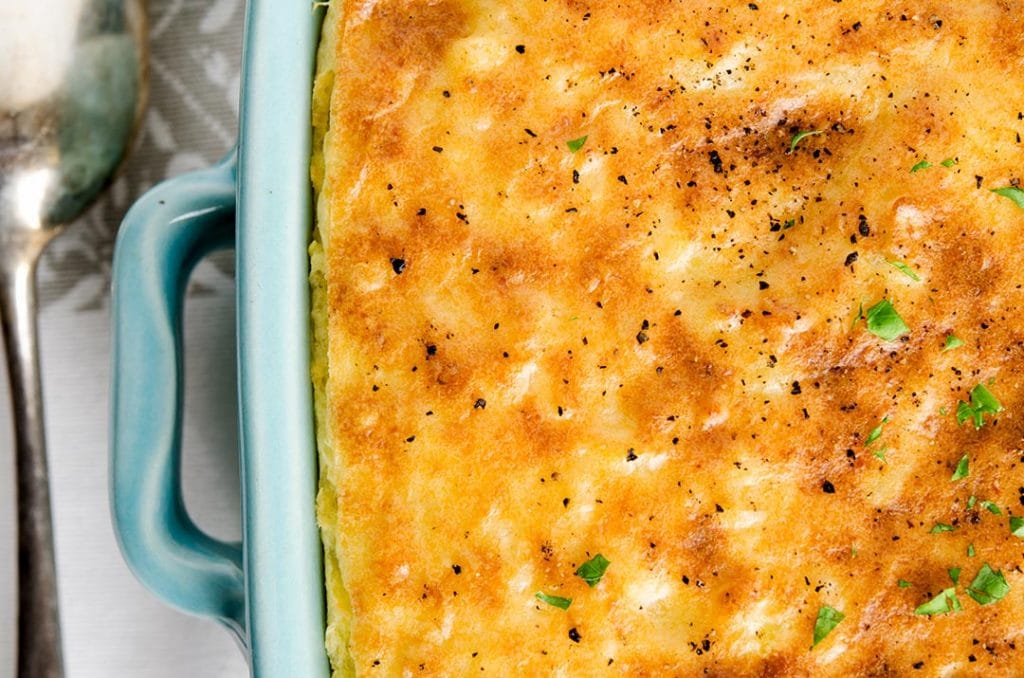 When I was growing up, we had these potatoes twice a year. Once was at Thanksgiving and the other was on Christmas eve. That’s why they were known as the “holiday mashed potatoes” around our house. Everyone knew this recipe by name and held it in the highest regard. It was kind of funny now that I look back on it.

As with many holiday recipes that have been handed down through the generations, there was a right way and a wrong way to make the holiday potatoes. Some of them are a bit comical. The original recipe states that the potatoes were supposed to be cubed after they were boiled and still hot. Why? I value my hands too much to continue this ridiculous notion. There’s also a note that the potato mixture was also supposed to rest in the refrigerator overnight. I have never noticed any difference between rested and non-rested potatoes.

The original recipes also suggested that the holiday potatoes alway needed to be baked in the same deep, round souffle dish. This one still makes sense to me. It is just awesome to see the potatoes peeking out of the top of this dish. I would have used it to show in this blog post, but I don’t have one while we are living in France. Instead, I used a really nice baking dish I picked up in Cassis.

I’m not sure why this recipe doesn’t get more play throughout the year. It’s not hard to make and the potatoes are so absolutely incredible that it is almost mind blowing. Light as a feather with just a touch of richness that doesn’t overwhelm the rest of the meal. I’d go so far as to say that this is the perfect mashed potato recipe.

Maybe that’s a stretch, but wait until you give them a try.

We are going to take your ordinary mashed potato recipe to the next level. Just about anyone can boil a potato, add some butter, cream and some seasonings then go crazy with a potato masher. If you use the right potatoes, it should turn out well every time. This recipe is going to be a bit different.

Yes. We are going to make a mashed potato souffle. It may sound intimidating, but I will assure you that it is incredibly easy to make. A traditional souffle would use egg whites to provide the “puff” that makes a souffle so fluffy. We’re not going to go to all that trouble. Instead, we’re going to mix a couple eggs and some milk with a fork. The egg and milk combination will provide enough loft to make this souffle just about foolproof.

The most important part of this recipe is to add the egg and milk mixture AFTER all the other ingredients have been added into the potatoes and mixed well. You will find that the consistency of the potatoes move from a slightly thick, chunky consistency to almost soup-like once the eggs have been added. That’s exactly what we are looking for! Don’t be afraid to give this easy potato recipe a shot- I promise that it is worth it!

When I am cooking for the holidays or any other large family gathering, anything that can be made ahead goes directly to the top of the list. I find that there are a million-and-one things that need to get done before everyone comes over for a family meal. If I don’t need to be peeling potatoes and mixing extra stuff in the kitchen before everyone shows up, all the better.

The great news is that you can make this recipe several days in advance. Go ahead and make these mashed potatoes on Monday for a Thursday Thanksgiving. Here’s what you need to do:

The most important step is letting the potatoes come back to room temperature. One year I made these ahead of time, took them right out of the fridge and put them in the oven. Took an hour and a half to get them slightly warm enough. Needless to say, the main dish I made was already cold by then. Bummer.

QUICK COOKING TIP: All potatoes are not created equal! For this recipe you are going to want to use a golden, waxy potato. Baking potatoes have too much starch, too much water and will turn into a thick, gooey mess.

Seems like an odd way to head into the recipe… just make sure you are using the right potato!

To Boil The Potatoes

For the Mashed Potato Recipe

To Boil the Potatoes

For the Baked Mashed Potatoes

Remember that this is a souffle, which means that the potatoes will only stay puffy for so long! They will still taste delicious, but won’t have the “wow” factor after about 10 minutes.

Want some creative toppings? Try some fresh chives or some chopped up cooked bacon bits. I’ve also made these with some shredded cheddar in the mix which was absolutely delicious.

Yummy. I have a whole dish of these waiting on the counter for dinner. Tonight they are going to be served with my Boneless Beef Chuck Roast. They are just so good together. These delightful golden spuds also love a good Pan Seared Pork Chop or hearty Porterhouse Steak Recipe. For the holidays, you might serve them with either a roasted turkey or you might want to try my Perfect Roast Chicken Recipe.

As I said earlier in this post, I know that there are easier ways to make homemade mashed potatoes. Sometimes the idea isn’t always about what is easy, but about what tastes incredible. I know that you are going to love this recipe. Go ahead and give it a try! Happy eating.