This is the creamiest creamed leeks recipe.  And it is so simple!  All we need are leeks, butter and cream… with a pinch of salt.  The result?  A deliciously rich side dish ready in minutes.

THIS CREAMED LEEK RECIPE IS: GLUTEN FREE AND FANTASTIC. 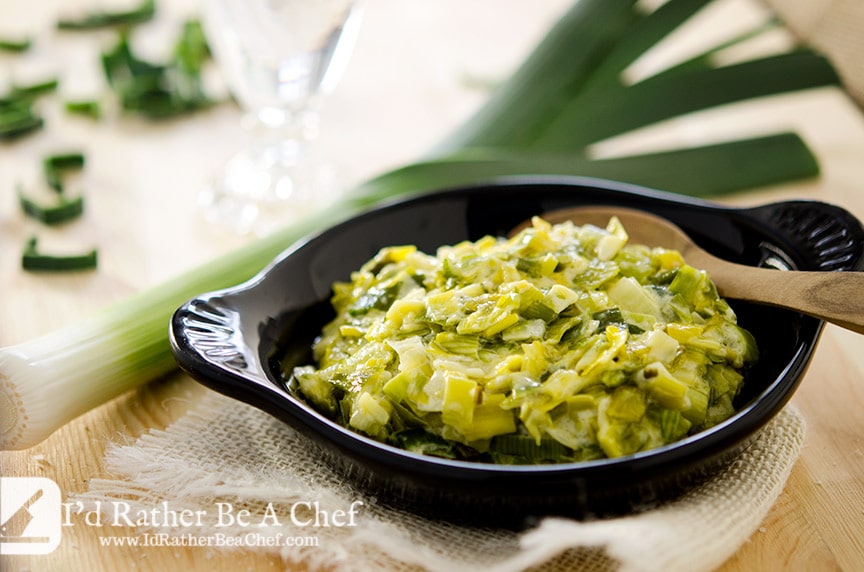 Mmmm… Creamed leeks.  If you’ve never tried them, you’re in for a real treat.  Leeks have a mellow onion flavor that is truly unique.  Here’s the trick: pairing leeks with butter and cream elevates the mellow onion flavor to incredible heights.  Your taste buds will thank you for making this recipe!  The second best part to this recipe is its simplicity.  Three ingredients!  Super easy.

Selecting Leeks at the Grocery Store

I’m thrilled that you’re going to try this recipe.  Let’s talk for a minute about leeks. So there are a lot of people who never buy leeks.  I don’t know if it is because they look weird or because they are a little dirty?  Whatever the reason, I’m about to walk you through buying the best leek possible.

First, keep in mind that leeks don’t come in any uniform size.  So if a recipe calls for 4 leeks, it is difficult to determine how many servings you will get.  At certain times, the leeks are HUGE and just yesterday when I was at the store they were super tiny.  Four super tiny leeks will most likely feed one person.

When you buy leeks, make sure that you feel them before buying.  You are looking for a firm leek up into the leafy greens.  Typically, only the white and yellow part of the leek is used, which is the main part of the leek.  Try to avoid super leafy leeks simply because there is a lot of product that won’t get used.

Lasty, don’t be afraid to pull one of the leaves down a bit to see just how dirty that bad boy is going to be.  I like to save myself as much work as possible in the kitchen, so I avoid really dirty leeks.  And believe me, leeks can get really dirty.

Ok.  Now that we know what to look for when buying leeks, let’s take a quick run through on how to prepare them for this creamed leeks recipe.

First, take your knife and remove any of the roots, being careful to only remove the root.  We want the end of the leek to remain intact.  After the root is trimmed, hold the leek with your non-knife hand with the leaves pointing away from you over the garbage can.  Now, use the knife to trim the leaves away from you as if you were sharpening a stick to roast marshmallows over a fire.  You should end up with the white and yellow part of the leek remaining, as shown in the picture below.

Once you have removed the dark green leaves, it’s time to split the leek lengthwise.  After it is split, run it under cold water and separate some of the outer layers with your fingers, washing away the grit.  In the picture below, it shows a split and cleaned leek, ready to be sliced.  Super easy!

QUICK COOKING TIP: It’s important not to cook your leeks too long or they will turn to mush in the pan.  Like with so many things in life, nobody wants a mushy leek.

Let’s talk about some delicious main dishes that would go really well with creamed leeks.  The first one that comes screaming like a madman into my head is my pan seared steak recipe with rosemary and garlic.  Oh yes.  Leeks love beef.  Another great main dish would be my slow cooked beef chuck roast recipe with sauteed mushrooms and onion pan gravy.  I’m getting hungry just thinking about it.

If beef is not your thing, you might want to try it the leeks with some crispy oven roasted chicken or they go great with my easy baked pork tenderloin.  These creamed leeks are so versatile… once you try them you’ll just want more!