Forget the nightmares you’ve had of gloppy cream of mushroom soup from a can. Let’s replace those not-so-fond memories with a new taste experience… cream of mushroom soup that is earthy, delicate, nourishing and wonderfully balanced. Let’s walk through how to make this delightful soup together in this recipe that is easy to recreate right in your own kitchen. 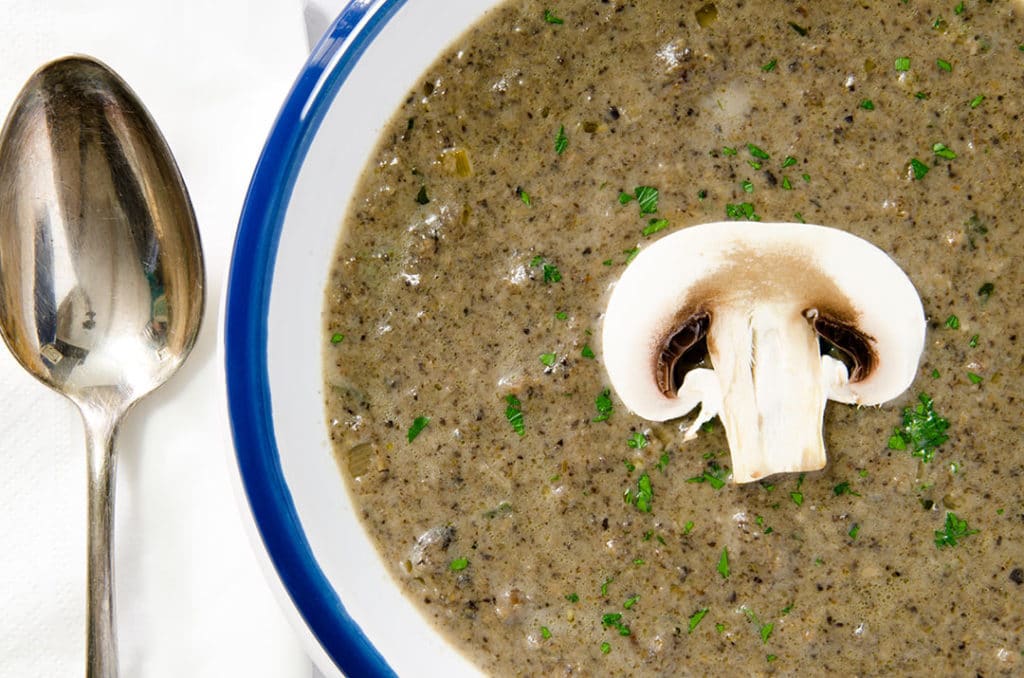 A SATISFYING CREAM OF MUSHROOM SOUP

Back when I was growing up, cream of mushroom soup was a staple canned food in our pantry. Used in everything from casseroles to gravy, it seemed like the wonder ingredient. If your dish needed a little something, pop open the can of condensed mushroom soup.

Do you remember what it looked like? Gray and congealed in the can… you need a spoon just to dig it out. And if you tried to eat it as a soup, well, it was less than appetizing. This stuff may have its place somewhere in the culinary world, but it’s no longer in my kitchen.

Although not a wonder ingredient, my version of a cream of mushroom soup is a terrific soup. The flavors are balanced between the leeks, onions, parsley and mushrooms. A little bit of cream goes a really long way too… it doesn’t weigh the soup down which allows it to remain very delicate. The balsamic vinegar provides just enough acidic punch to make it really interesting on your tongue.

This cream of mushroom soup is completely satisfying. With a portion of the soup pureed, it has a wonderful texture that plays the silkiness of the puree against the meatiness of the mushrooms. I hope that you enjoy this recipe as much as we do.

I’m into hearty winter soups. For most of my life I thought that soup for lunch or dinner just wasn’t enough food. Then I changed how I made soup. For soups that weren’t going to be completely pureed, I started to keep the ingredients a little larger.

Chicken and other proteins get cubed rather than sliced. Turnips and potatoes are a larger dice. I would add in more veggies and more of a variety of veggies than just carrots, celery and onions. You can see just how much of a hearty meal-in-a-bowl my homemade chicken vegetable soup is. Delicious, healthy and satisfying too.

In this cream of mushroom soup, we are going to puree about two thirds to three quarters of the soup. The ratio is completely up to you. If you want a more chunky soup, puree less. If you want a creamier soup with a surprise bite of mushroom now and again, then puree more of the soup. Pureeing more or less is not going to change the flavor much, but it will change the texture and heartiness.

HOW TO USE DRIED MUSHROOMS

For most of my life, I’ve been using dried mushrooms. My family has a Christmas Soup that we used to make every year that needed a huge amount of dried mushrooms. It was always an experience around the holidays going to various markets throughout Cleveland to find the right dried mushrooms for the Christmas soup. What I didn’t realize at the time was just how much flavor dried mushrooms add to soup.

The added flavor from dried mushrooms doesn’t come directly from the mushrooms themselves. The flavor comes from the concentrated mushroom stock that occurs during the rehydrating process. Here’s how to properly rehydrate mushrooms:

QUICK COOKING TIP: I’ve been asked in the past about using different kinds of mushrooms. For example, is it possible to use hen of the woods, shiitake or even portobello mushrooms? The answer is that yes, it is possible but it isn’t what I used. Does that mean you should use exactly what I did? No way. Just plan on needing to do some flavor adjustments.

Additionally, wild mushrooms are relatively expensive compared to white, crimini or baby bellas. I mean if you want to buy chanterelles to make this soup it would be delicious, but the ingredients would be relatively cost prohibitive. Instead, my suggestion would be to create the base of the soup with the more widely available mushrooms and add in the wild mushrooms after the “puree step” in the recipe.

Keep in mind that some of the wild mushrooms have very different moisture capacities. Lobster mushrooms tend to be more dry while oysters store a ton of water. Chanterelles can be dry or moist, depending on how they have been stored. Cook each one accordingly before you add them to the soup.

This soup is great on its own, but it is also wonderful served over rice. You can top it off with some delicious browned sausage or sauteed chicken. It is a delicious meal in a bowl.

If you want a more creamy soup, add in more sour cream. If the consistency is too thick, add in some milk or cream.

Want to make a Paleo version of this soup? Substitute ghee for the butter and coconut cream for the sour cream.

This soup will taste very earthy and rich with all the mushrooms and leeks. As with most soups, it tastes best the day after it is made!

FINAL THOUGHTS ON THE CREAM OF MUSHROOM SOUP RECIPE:

One of the many things I love about living in France is the abundance of delightful mushrooms at the markets… particularly in early autumn. Fresh ceps (the French name for porcini) and girolles (chanterelles) take a steak dinner from ordinary to extraordinary in a snap! I also like that the white and crimini mushrooms arrive in my basket mostly cleaned. I’ve been noticing more and more in the States that the mushrooms are being sold with an incredible amount of dirt on them.

My final thought is more of a suggestion for this soup. I’ve mentioned it in the notes of the recipe but it is worth repeating… ladling this soup atop freshly cooked basmati rice is a real treat. We added in sausage one day that was delightful. The next we added in chopped sauteed chicken breast. Just fantastic. Completely filling. Super satisfying too.

How will you prepare this soup? To eat on its own as a starter or jazzed up for a full meal in a bowl? However you do it, let me know and have a great time in the kitchen.