Sometimes you have to turn a traditional recipe upside down to make something new and delicious. That's what you will find with this Blonde French Onion Soup Recipe. We're going to just kiss onions with caramelization, add some cooking soul with a splash of vermouth and really layer in the flavors for this delicious soup. Stay with me and check out the recipe. 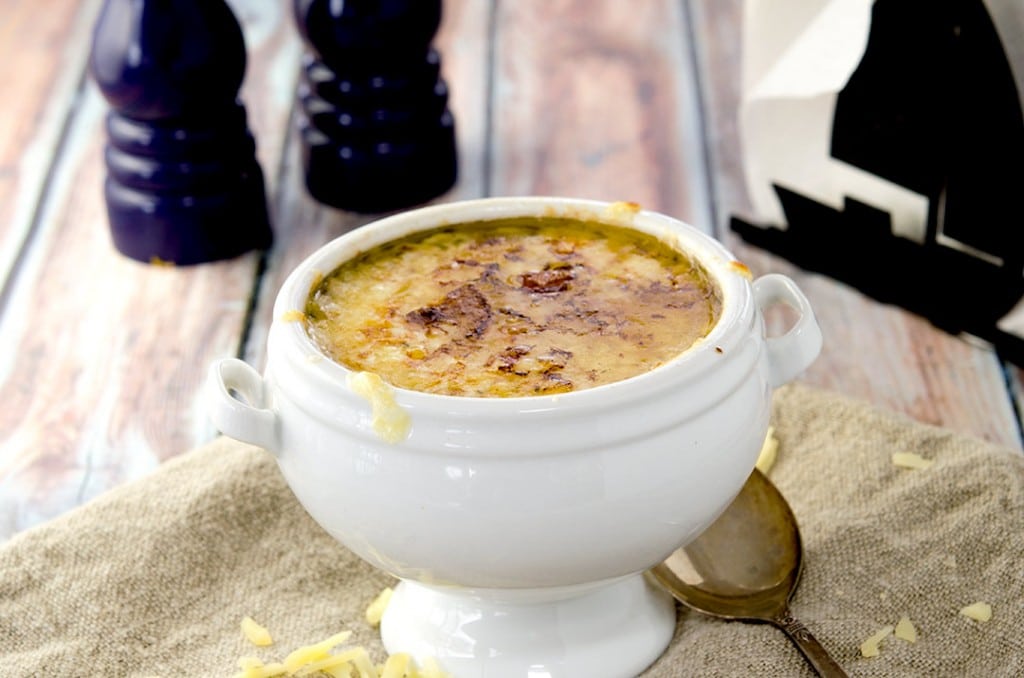 I almost didn't post this recipe. Kind of a strange way to start a post on a recipe, right? It's not because the recipe isn't worthy of being posted... let me make this really clear. This Blonde French Onion Soup recipe is truly wonderful. I almost didn't post it because something really important came up and I had to stop the caramelization process on the onions. I've made French onion soup a hundred times and never had it be so light. I expressed my disappointment to Caroline and in true Caroline style, she said: "let's just see how it is..." Well, I'm glad that she kept me in the game on this one. It's not just good, it's over the top delicious.

I changed my recipe up toward the end of the cooking process to speed it along. Sometimes this works well, sometimes it doesn't. The soup was so light that I decided not to use sherry and add in some balsamic vinegar for acidic balance and to increase the depth of color. It didn't work. The color stayed light and the soup didn't have the flavor profile I wanted. It tasted too heavy on the left side of my palette with no round mouthfeel. So, I figured there's nothing to lose at this point! I added in the sherry. At first, the flavors were fighting against one another. Within 10 more minutes of simmering, they were playing well. After 30 minutes a synergy was created in that pot which needs to be shared. You're going to love this take on a traditional French onion soup recipe.

HOW TO MAKE FRENCH ONION SOUP FROM SCRATCH

I think that the best French onion soup is made from scratch. When I was growing up we used some kind of flavor packet that we poured into boiling water with some onions. It's no wonder I've had high blood pressure for so many years- the sodium content in these packets is off the charts! And who knows what else is in those packets. My advice is to take a little bit of time and make it from scratch.

The best way to do this is to have really good foundation ingredients. This starts with homemade beef stock. If you don't have homemade, make sure to buy no salt added stocks that have the LEAST amount of ingredients on the label. You would think that it would just be stock in there, but manufacturers need to make the product shelf stable.

In addition to the stock, using fresh dried and live herbs is really important. If your bay leaves are handed down from your grandmother, it's time to invest in some fresh bay. No Grandma disrespect, just want to make sure you're using fresh ingredients!

Ok, so once we have all the ingredients we are going to need a heavy bottom pot that is large enough to hold between 8-10 cups of sliced onions and 8 cups of stock. Yes, 3 large onions will translate to 8-10 cups of sliced onions! I used a dutch oven with a nice, tight fitting lid. When we are cooking the onions, the moisture that builds in the pot is important to soften and prevent burning.

Now that we have all the equipment and ingredients, we're ready to make French Onion Soup from scratch.

One thing I need to address quickly is the cheese we are going to brown on top of the French Onion Soup. So if you are paleo, then don't add the cheese. It will still be really delicious. If you're following the primal, gluten free or low carb lifestyles then a little cheese goes a long way.

I'm pretty flexible with most of the cheeses people want to use on French Onion Soup. If you have Jarlsberg, Provolone, Swiss or even Comte, go ahead and add it on there. I'm a sucker for Emmental on French Onion, but it is not an absolute. The one cheese that I feel is an absolute is the Parmesan. This is not the crap from the green can. Fresh shredded or flaked Parmesan will really kick up the flavor for this soup. It also browns nicely under the broiler.

Ok. We have reviewed everything to get started on this delicious Blonde French Onion Soup Recipe. Let's get to it.

Yes. Yes. And Yes, please. I'm a big fan of this soup. We just finished the batch off today for lunch. Let me tell you that it gets better resting two days in the fridge. Wow.

I did make one mistake today. I added in the cheese too quickly to the soup and it sunk well below the surface. Without the bread in there to "float" the cheese on top, we have to be a bit more careful. It didn't really matter- it was still so damn good. I hope that you take some time to make this unique spin on a French Onion Soup recipe. Enjoy!

Great idea to make this a "blonde" recipe. So cool.

Hey,
Thanks for your appreciation.
Take care,
Scott