If you’re looking for an easy split pea soup recipe, you’ve found it.  All you have to do is chop an onion, a shallot and a little garlic.  The result?  Silky smooth, delicious split pea soup. 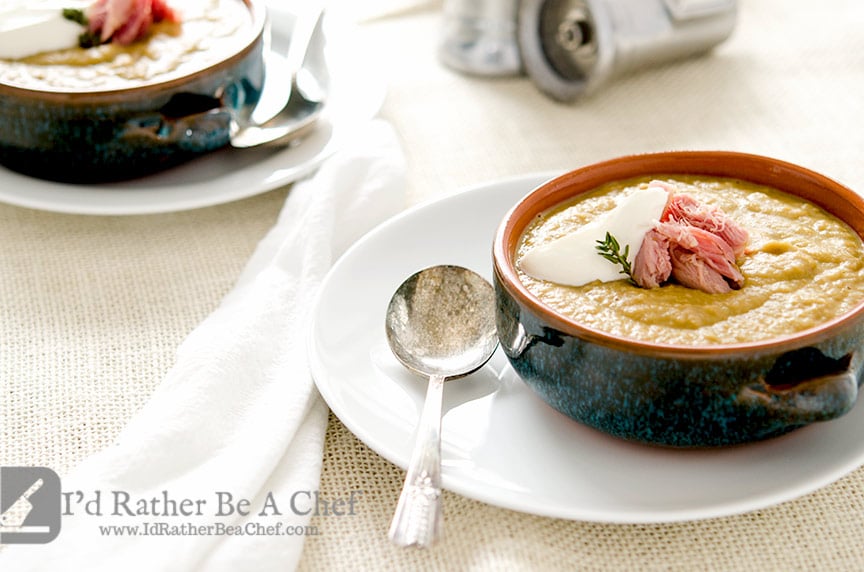 Growing up, I was never a fan of split pea soup.  I mean, what kid really loves split pea soup?  Tell you what, if I had this recipe growing up my story might have been different.  There’s a really nice harmony created between the smooth texture of the peas and the smoky ham shanks.  The depth is added into the soup with onions, shallots and garlic… with a little bit of bacon love too.  The good news is that both my kids love this soup.  Makes me happy.

Okay.  This is a confusing topic, but an important one.  The ham shank is a cut from the front leg… but it is also called a hock.  This shank / hock is really meaty and doesn’t require the long cook time to make it palatable like the “other” ham hock. So the other ham hock comes from the back leg, right above the foot.  This gnarled bit has a lot of connective tissue, bone and not much meat.  I’ve used the rear ham hocks and it never yields the amount of meat that I am looking for.

If you’re not sure which one you have at the grocery store, be sure to ask the butcher.  Shanks are a bit harder to find, but worth the look.  Here in Cleveland they have them at the West Side Market or at Miles Market.

I’ve never been a fan of rinsing split peas, but I think that a good shake in a colander or sieve is necessary before cooking.  I like using the colander simply because the holes are larger and it allows anything that isn’t supposed to be in there to fall through.  Sometimes there is some grit in with dried beans.  A quick swish around a colander lets all the bits drop through.

Ok.  Let’s get into this easy split pea soup recipe.

Once upon a time I would have eaten this soup with a piece of toasted baguette and some salted butter.  It’s so good.  If you’re still eating gluten, give it a try.   Today I enjoyed this soup with the memory of my missing baguette.  It’s not very often that I miss bread, but this is one of those soups that goes well with bread.

I love adding sour cream to pureed soups.  It is really delicious on the Roasted Vegetable Soup.  If you have crème fraîche all the better.  Around our house, we eat enough Southwestern style food that we have sour cream on hand most of the time.

Hopefully you give this easy split pea soup a try.  Let me know how it turns out! 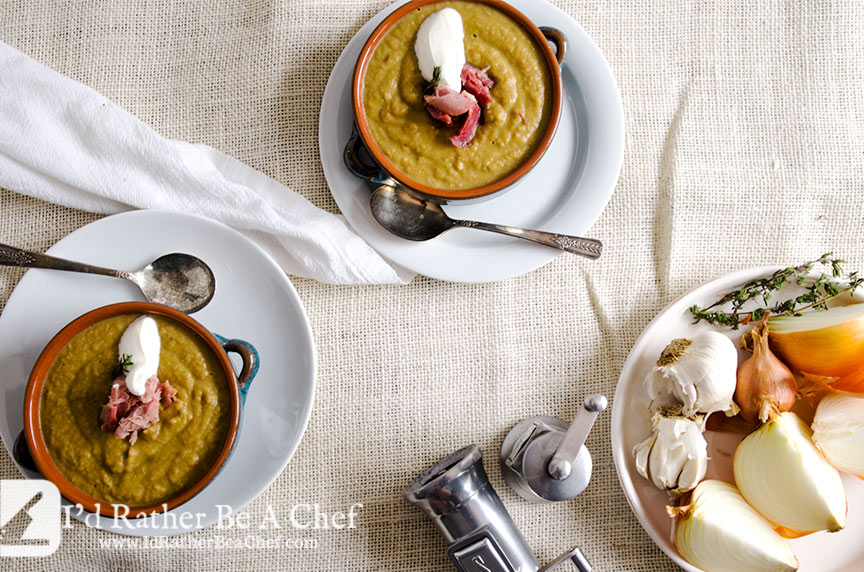