There aren’t many vegetable side dishes that are easier to prepare than sauteed spinach. You’ve just found one that is not only easy to prepare, but packs in huge flavors with crumbled bacon, fresh shallots and some (optional) red pepper flakes. It’s incredibly delicious and ready in under 5 minutes. Take a look at the recipe for more.

THIS SAUTEED SPINACH RECIPE IS: GLUTEN FREE, PALEO AND PACKED FULL OF FLAVOR. 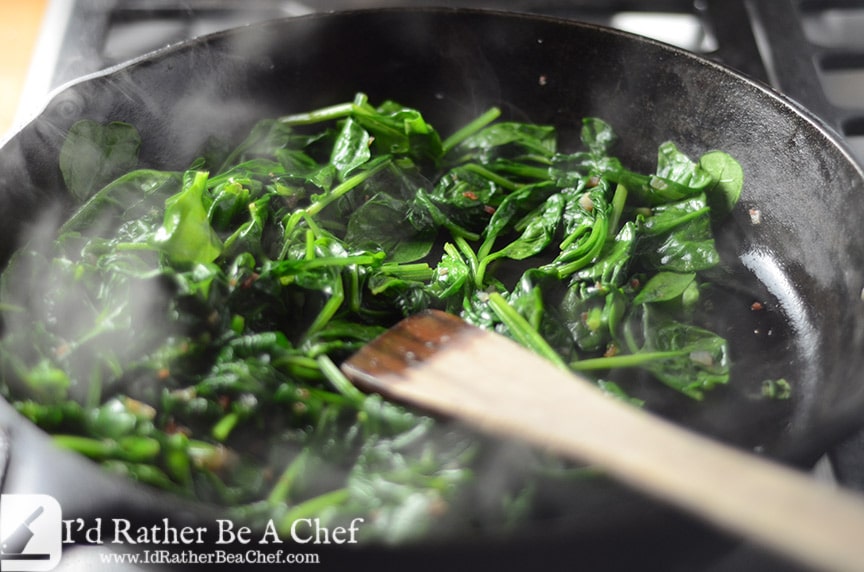 There’s sauteed spinach… and then there’s sauteed spinach.  What makes spinach go from “ho-hum” to “holy moly!”  All I know from making spinach a hundred different ways is that this recipe really pushes this tender green to its true delicious potential.  That’s what I love about vegetables: once you find the magic combination of flavors they just open up on your palette.  I learned that from Michele in our commercial catering kitchen where we moved through a ton of veggies.

So some people may read the recipe below and think that cooking spinach in bacon fat is cheating or gross or unhealthy.  Cheating maybe, but I’ll let you be the judge on the rest.  Or just make it and let me know your thoughts after.  And yes, I do cook a lot of veggies in bacon fat like these delicious open-faced sautéed brussels sprouts or sautted zucchini with thyme.

The trick to this recipe is to gently cook the shallots in the bacon fat with just a pinch of salt.  Once they have just started to brown, you can either turn off the pan (the spinach only takes about a minute to wilt and doesn’t taste great luke-warm or cold) and hold them there until you are ready to fire off the spinach.

If you have kids who swear that they will never eat spinach, try this recipe out.  My kids don’t just love it, they request it at least once a week.  We don’t eat it quite that much because there are so many delicious veggies out there, but we’ll throw down on this sauteed spinach with bacon and shallots at least one or two times a month.

QUICK COOKING TIP: Using tongs for this dish is going to be the easiest way to manage the raw spinach until it starts to wilt.  Grab down with the tongs and rotate the uncooked spinach so it all begins to wilt.  Then you can use a wooden spoon to mix after it has begun wilting.

My suggestion is to alway put MORE spinach in the pan than you think you will need.  It is truly astounding just how much volume is lost when the spinach wilts.  For a dinner for our family we easily use 1/2 LB of spinach and there is nothing leftover.  Your pan will seem crowded (see the photo in the middle below) but after about a minute everything will cook down.  Ok, let’s get to this recipe.

This sauteed spinach recipe is best served hot, right out of the pan. The spinach does not tend to hold very well and after sitting for a while will release additional moisture that will pool in the bowl.

If you’re planning a dinner party or gathering, just make sure that this is the very last thing you put together before serving!

PLEASE NOTE: The nutritional data is provided by NutriFox and may not be 100% accurate.

Here’s a couple variations on this recipe… You can add in fresh minced garlic to really kick it up a notch.  Or, add in some spicy red pepper flakes when you are cooking the shallots.  Adding red pepper flakes during the cooking process will really open up the flavor of the red pepper and bring out a nice heat.  We eat this a lot without the bacon bits in there too- just shallots and spinach.

What a great side dish. It pairs really well with just about any cooked protein… If you’re looking for some delicious recipes to round out your meal, check out my Baked Pork Tenderloin Recipe or my Perfect Roast Chicken Recipe. One of my favorites with this is just a couple grilled pork chops seasoned with salt and pepper. Simple and really tasty.

If you made this Sauteed Spinach Recipe or like the way that it sounds, please leave your thoughts or feedback below!