I love a good slow cooker coq au vin recipe as much as the next person... but sometimes it is so refreshing to change things up a bit.  We are going to use some crisp white wine rather than red in this coq au vin recipe.  The result?  Deliciously sultry, soul satisfying chicken.  Oh, it is so damn good. 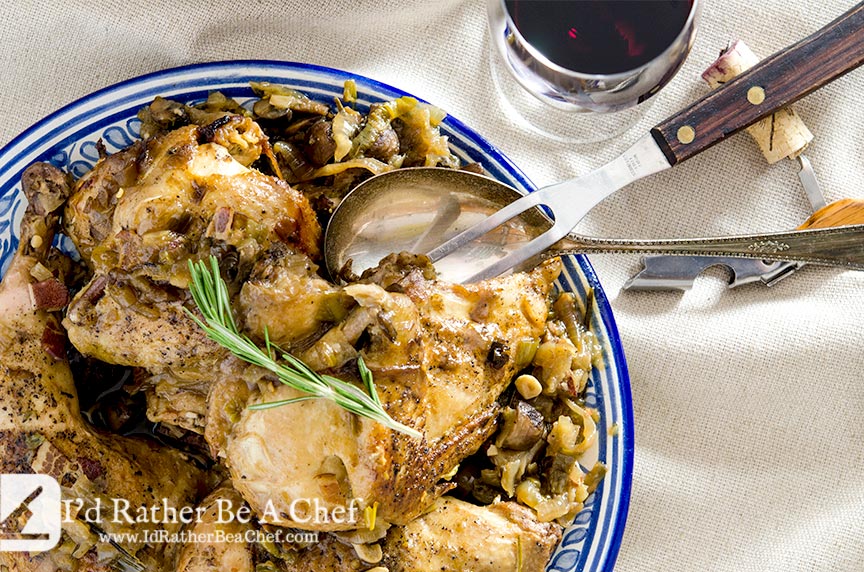 COZY UP WITH THIS SLOW COOKER COQ AU VIN

When I was running my cooking school, we made traditional style Coq Au Vin just like all the other cooking schools out there.  I think that it is the obligatory recipe to make for any French style cooking class.  Sure, it's a good dish... but everyone is doing it.  Time to break the tradition.  You're going to be amazed at the depth and character white wine brings to this recipe.

We are going to cook this chicken for about 3 hours on high in a slow cooker.  If you don't have a slow cooker, you can achieve the same results with an oven proof pot with a tight fitting lid.  Set your oven for 250 degrees.  The times might be a little off, but not by much.

When we cook chicken in the slow cooker, I like to use chicken quarters.  You get the best of both worlds with both the dark and light meat.  If you are avoiding dark meat, go ahead and substitute in 4 BONE-IN chicken breast quarters.  If you are going to make the chicken breast substitution, I would add in a bit more bacon and cook the breasts meat side down in the crock pot so they can absorb as much flavor as possible.

BUILDING FLAVOR IN A RECIPE

There are so many different slow cooker coq au vin recipes out there to choose from.  Many of them simply have us brown the chicken pieces and add everything else to the slow cooker.  Sure, you will have slow cooked chicken at the end, but we really want to try to build the flavors so you end up with the most delicious, decadent and deliriously delightful chicken you've ever eaten.

To build flavor in a recipe, we need to do just a bit more work than tossing everything willy-nilly into a pot and hoping for the best three hours later.  In this recipe, we will brown the chicken but then we will saute the onions, mushrooms, leeks and garlic to punch up the flavors to their maximum potential.  We are going to season each layer from the onions to the garlic so they taste delicious all on their own.

Once everything tastes fantastic, then we will add all the components together in the crock pot.  The resulting meal has no choice other than to be wonderful because everything we put in tasted so good to begin with.  Cooking is easy when you build flavor as you go!

QUICK COOKING TIP: Use a heavy bottom pan to brown the chicken.  Be sure to get the pan and the cooking fat (whether you use oil, bacon fat or ghee) really hot before adding the chicken.  We want to get a beautiful brown skin.  Additionally, make sure not to crowd the pan.   If you add too much chicken into the pan, the temperature will fall too quickly and not be able to recover fast enough for good browning.  What will happen, however, is that the chicken will lose moisture... just enough to start boiling the bird rather than browning.  You'll end up with gray, soggy skin.  Nobody wants gray, soggy skin.

Getting Ready for the Slow Cooker

If you have read this far, congratulations.  You're dedicated to making some delicious coq au vin and I'm confident that it is going to turn out great for you.  I did want to touch on one thing my wife asked me about the recipe which you may be curious about as well.  She asked why I used beef stock rather than chicken stock.  Here's the answer: it adds complexity to the flavor.  Beef stock has a heady richness that chicken stock lacks.  You will love it in this recipe.

You might be looking for some veggie side dishes to go with the slow cooker coq au vin recipe.  My suggestion would be to add anything green.  From an al dente broccoli to a crispy pan braised asparagus with balsamic (recipe coming soon!).  I've made this wonderful dish before with sauteed spinach with shallots and also with sauteed brussel sprouts.

We enjoyed our meal with a delicious little merlot.  It would also go well with a sturdy Italian... maybe a Barbera or a Barolo.  Happy eating! 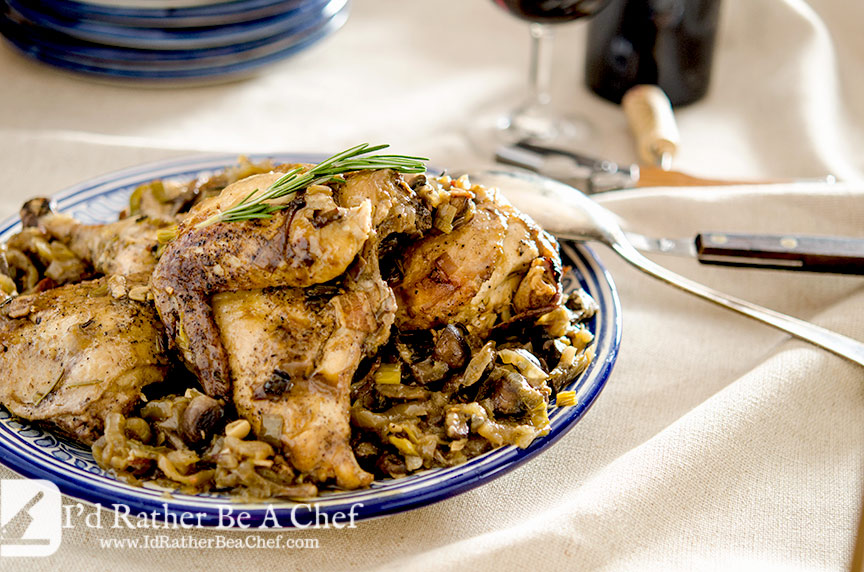 "Deliriously delightful", probably one of my favorite lines of the whole post! 😀 I have never tried coq au vin but have always thought of it as a really fancy pants dish. Putting in the slow cooker makes it much more approachable and your post was so informative!

Thanks for stopping over! The slow cooker makes this recipe so easy. I'm making it again tonight for some of our friends coming over. Also makes entertaining easy because there isn't a lot to do!

Have an excellent weekend!

Oven Baked Chicken Tenders | I'd Rather Be A Chef

[…] We recently had a house full of friends and their kids.  I didn’t have enough of my Country Coq au Vin in the slow cooker, so it was time to get creative for the kids. I had three packs of chicken […]

Lemon Butter Haricot Vert Recipe | I'd Rather Be A Chef

[…] with my baked lemon artichoke dish (recipe coming tomorrow 2/9/16).  We made the beans with my country style coq au vin this past weekend for guests and the brightness really complimented the slow cooked […]

I've never made a coq au vin with white wine before, but let me tell you that it is fabulous. My whole kitchen smells just delicious.

Hi Betty:
I know, I'm drooling every time I make it. The smell is absolutely divine.
Thank you for taking the time to write.
Have a fantastic day in the kitchen!
Scott

What was the rosemary for?

Hi Jackie:
The rosemary goes into the slow cooker with the chicken- it is going to add a really delightful flavor!
Thanks for asking and have a fantastic day in the kitchen!
Scott

Doesn’t the slow cooker get crowded with chicken. I wanted to use whole chicken legs. Should I do separate thighs and leg pieces? Planning to make this week. Thanks.