In this recipe we will work together to make a fantastic steak tartare. We will make it in the traditional French style with just a few twists to crank up the flavor. Stick with me to learn the secrets to this delicious dish. 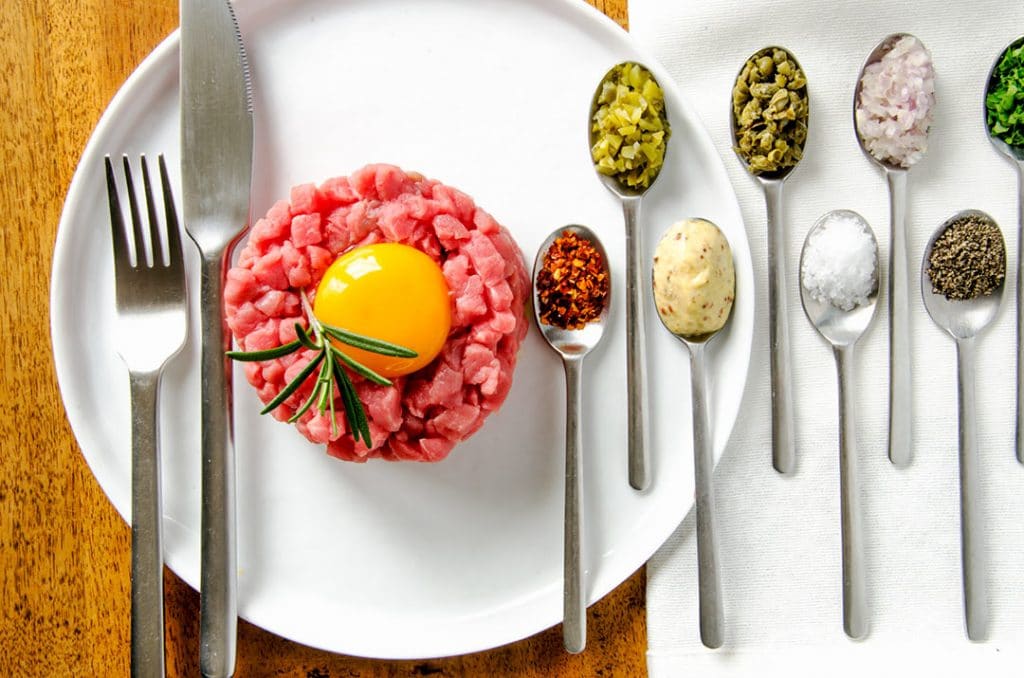 I ate my first steak tartare at the 21 Club in New York City. I remember feeling like I had no right dining at such a swanky restaurant at 20 years old without someone with white hair accompanying me. I also vividly remember my first verbal snubbing by the sommelier who seemed to sense my insecurity like a shark swimming in chummed waters. The evening didn’t get any better when I ordered the steak tartare as an appetizer.

At the time, I had no idea that this wonderful dish was composed of raw beef and a raw egg yolk. I’d never eaten either ingredient raw at that point in my life, much less on the same plate. Any steak not cooked to the consistency of boot leather was considered unsafe in our house. How could this restaurant not know they were endangering the public (obviously they were not actually endangering anyone)? The worst part was that there were no instructions on how to eat such a deconstructed appetizer.

All told, I suffered through my first beef tartare in silent agony. I’m sure that if I were to time travel back to that restaurant with my current palate it would have been a top notch appetizer. Beef tartare is one of my favorites now. After living in France for almost seven months now,  tartare is almost always my first choice at any restaurant where it is served. There’s something about the taste of an ingredient in its most pure form that I truly enjoy.

There is a wonderful Tuna Tartare at Chez Gilbert in Cassis, France that I am currently in love with. The veal tartare at Les Terrasses Du Bassin in L’Isle-sur-la-Sorgue is so tender and flavorful that nothing else on the menu holds my interest. In Paris at Le Coin, Chef Thierry makes a ground beef tartare that is second to none. My mother-in-law makes a particularly wonderful salmon tartare, which is saying something since salmon is a fish that almost never crosses my plate by choice.

In this recipe, we are going to make a traditional French style tartare. It is simple, pure and tastes delicious. You’ll be able to taste the flavor of the beef, so be sure to get the best you can.

WHAT IS STEAK TARTARE?

Very simply, steak tartare is lean raw beef which has either been finely chopped, minced or ground which is served with a raw egg yolk and seasonings. Originally, beef tartare was served with a side of tartar sauce which is where the name came from. Somewhere along the line, the tartar sauce went to the wayside being replaced by the more modern version.

When I say lean raw beef, that’s really what you should be using. If you have ever tried a piece of raw beef fat then you know that it coats the tongue with a really off putting flavor and almost slimy mouthfeel. That’s not what is going to make a yummy tartare. Choose cuts like the top round, tenderloin or sirloin. Trim any visible fat and discard.

Here are the three different styles of preparing tartare:

Now is a good time for me to put in my disclaimer: You have to remember that consuming raw or undercooked meats and eggs may increase your risk of food born illness. This recipe revolves around using raw ingredients, so you need to be careful when making this dish. Being careful starts at the butcher. Let your butcher know what you are making and have them cut you a fresh piece of beef. I don’t recommend anything in a styrofoam tray covered in plastic for this recipe. The day you buy your beef from the butcher is the day you should plan on using it. 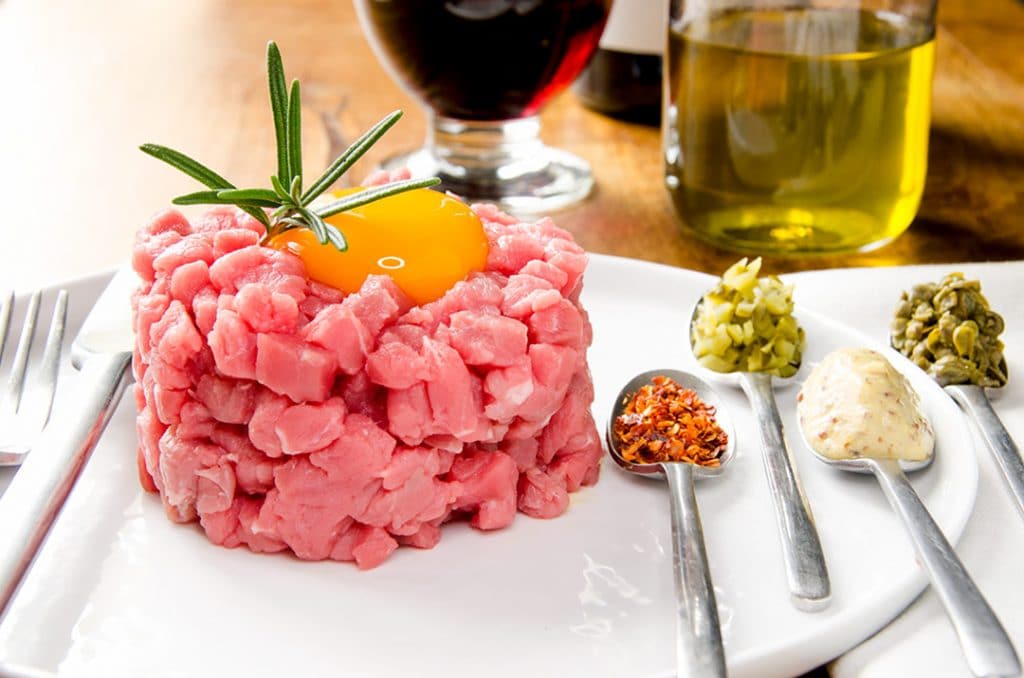 STEAK TARTARE RECIPE: IT’S ALL ABOUT THE TOPPINGS.

Just eating raw beef isn’t all that interesting. A good steak tartare recipe needs to have delicious ingredients to mix with the beef to provide flavor, fat, acid and salt.

We’re going to add salt into the recipe in three ways. First, we are going to add it with the cornichon (mini French dill pickles). Next, we will add more salt flavor with the minced capers. Lastly, we will add some kosher salt directly into the tartare. My suggestion is to add the salt sparingly at the end as you can easily overpower the beef if too much salt is added.

We will add fat with the addition of some good, high quality olive oil and the egg yolk. We’ll balance the fat with the Dijon mustard and the acidity of the lemon juice. The lemon will both balance and provide brightness. Flavor is added with shallots, parsley and red pepper flakes.

QUICK COOKING TIP: The best way to be able to nicely chop your beef is to follow these simple steps:

Ok. I think we’re ready to get into this wonderful steak tartare recipe. Let’s do it!

For more ideas on toppings, please read through the toppings section of this blog post! One of my favorites is chopped arugula, parmesan cheese, lemon juice, high quality olive oil, balsamic vinegar, salt and pepper. Yum.

Please note that consuming raw or undercooked meats or eggs (as suggested in this recipe) may increase your risk of food born illness.

There are lots of ways to prepare steak. I love a good Pan Seared Steak or a seriously satisfying Sous Vide Porterhouse Steak. I’m working on a post for how to make a steak just like you get in a professional steakhouse. A good steak tartare recipe is just as much about the preparation and flavoring as any other way to make a steak. Tartare just takes out the element of heating the beef and relies solely on the foundation of good, high-quality beef. Do yourself a favor and make sure you get a good piece of beef to start!

Do you have a favorite tartare recipe or is there a preparation from a restaurant that you love? Post up your ideas! I hope that you enjoy this recipe and happy eating!