A wild mushroom omelette recipe that you’ll go wild for!  Topped with a fine herb (or fines herbes) sauce which pairs perfectly.  So tasty.  So fresh. 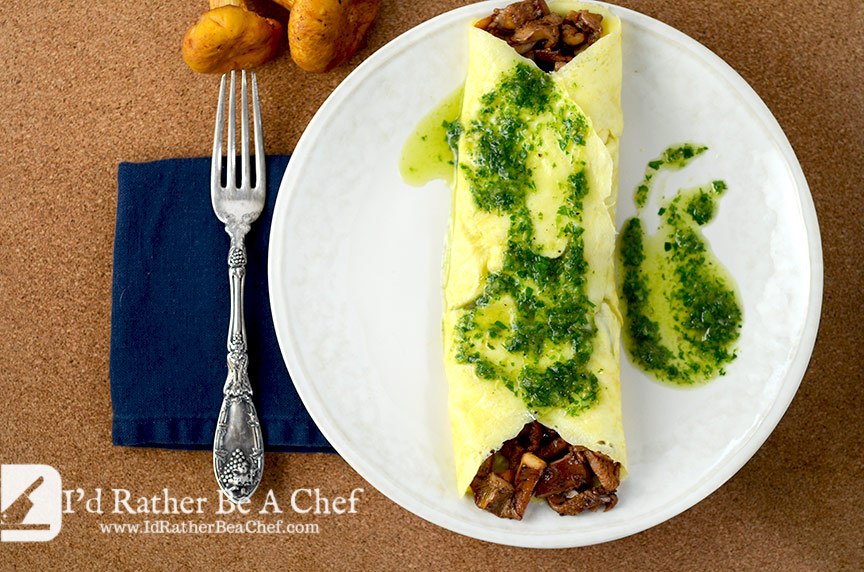 When you have access to three pounds of chanterelle mushrooms, you have to take advantage of it!  My father-in-law bought ten pounds (yes, I said 10 pounds!) of mushrooms from a grower in Oregon.  What an awesome sight to behold: pounds of chanterelles, black trumpets, hen-of-the-woods, beech mushrooms and the awesome “lions beard” mushroom.  I was in mushroom nirvana.

The plan was to use most of the chanterelles with some delicious CAB hanger steak which was being preparing for dinner the following night.  Some of the mushrooms were earmarked for a huge mushroom soup.  It seemed as though we would have no problem burning through all these shrooms.  One thing that I really wanted to make was something mushroomy for breakfast. Why? Simply because I love mushrooms and eggs!  The wild mushroom omelette recipe was born at that exact moment when I began scribbling down notes for the herb sauce.

For this recipe, the earthy nature of the mushrooms needed to be counterbalanced by something really fresh and bright.  The fines herbes sauce was just the ticket.  I had shallots, parsley, chives, tarragon and lemon zest on hand, so that is what I made the sauce with.  Figured that they would work pretty well and boy did they ever.  A nice, bright sauce will elevate any egg dish… and works really well here too.

QUICK COOKING TIP: When cleaning wild mushrooms, there are a couple tips.  First, you can do what my father-in-law does and take an old toothbrush to them.  You literally brush off all the dirt, leaves and pine needles.  It works well and really connects you with the mushrooms you’re about to devour.  The other method is to get a lukewarm bowl of water prepared.  First, shake off any of the debris that you can from the mushroom, then gently swish it thorough the water, loosening any stubborn grit.  Lay the mushrooms out on towels to dry.

Ok, so let’s get to the wild mushroom omelette recipe! 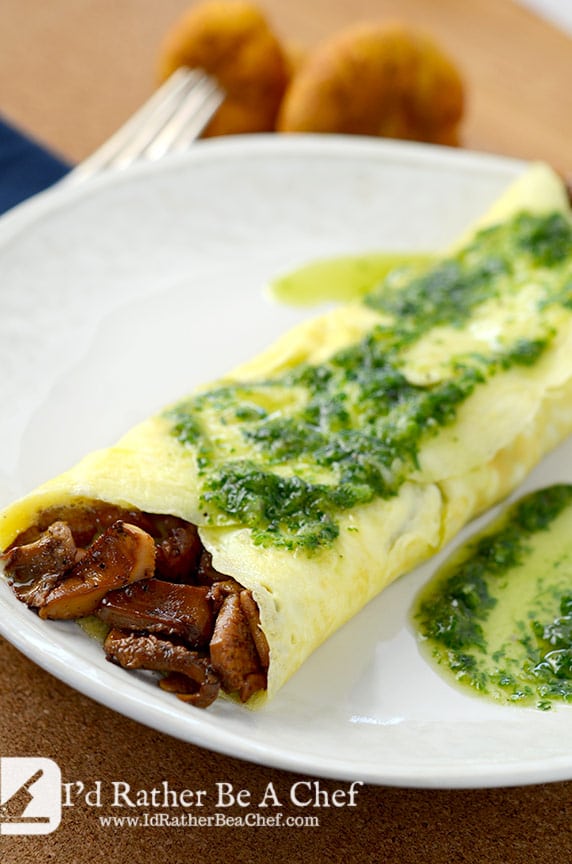 For the Fines Herbes Sauce

For the Wild Mushrooms

For the Fines Herbes Sauce

For the Mushrooms (more detailed instructions in the sauteed mushrooms post)

So can you make this omelette without the fine herb sauce?  Sure.  But would you eat a steak without seasoning it first?  Maybe, but the results are going to be so much better with a little spice of life!  The sauce takes a couple extra minutes, but you will have some left over (most likely!) and can use it on a bunch of things.  It would be great over just regular eggs, or you can brighten up some soup or add it over chicken or fish.  After you taste it, let your imagination run wild!

You can make this recipe with just regular mushrooms as well.  Crimini or baby bellas would be a great substitute.  If you like oyster mushrooms or shiitake, go crazy!  If you happen to have some lions beard mushrooms just laying around, sautee them off and throw them in some eggs.  However you want to do it will work out just fine.

If you have any thoughts, comments or other favorite egg recipes you would like to share, please do so!