Packed with southwest flavors, this easy pulled pork recipe will knock your socks off.  With preparation time under 5 minutes and guaranteed tender, juicy and super flavorful pulled pork... this recipe is a winner. 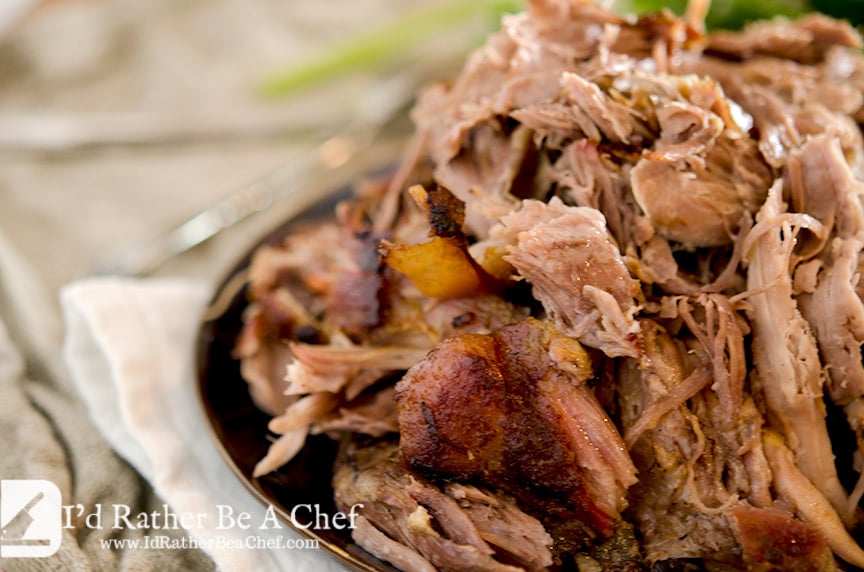 Pulled pork is just about one of my favorite foods.  It's tender... almost impossibly so when cooked correctly.  It's juicy... particularly when the pan juices are added back in.  It's packed absolutely full of flavor... Adobo, cajun, garlic, onion and cilantro all work together to please your palette.

Being true to its name, this easy pulled pork recipe is truly easy.  After mixing together the dry rub spices, all that is required is using a spoon to scoop out the adobo sauce from the can.  The oven takes longer to preheat than getting this recipe ready to go.  I just love the simplicity of this recipe.

My tip for preparing the pork is to really rub the spices into the meat.  Top and sides.  No need to season the bottom of the pork.  After the spices are rubbed in well, use a spoon to scoop out the adobo sauce.  I recommend scooping out all the sauce first onto the pork, then use the back of the spoon to rub it around on the pork.  The actual chile peppers are too spicy and can be used for a different recipe or discarded.

We are going to blast the pork at 425 degrees for about 30 minutes to get a nice crust to the adobo sauce and seasonings.  It's important that the oven is up to temperature before putting the meat in the oven.  We need the high heat for the full 30 minutes.

After half an hour, pull the pork (ha... pull the pork) out of the oven and layer the cilantro over the top.  There are two reasons to add the cilantro.  First, it is going to add some really nice flavor to the pork.  Second, it will keep the aluminum foil away from the adobo sauce.  If the foil comes in contact with the adobo while the pork is braising, you will see the aluminum disintegrate.  It's a chemical reaction that occurs and although it is considered "safe" to eat the aluminum, I'm not going to test those waters.

I know that it looks like a lot of cilantro, and it is, but make sure that the whole pork is covered up nicely.  The cilantro will completely wilt during the cooking process.

QUICK COOKING TIP: The end goal is to get this pork to at least 190 to 200 degrees.  At this temperature, the fat and connective tissues will dissolve, leaving tender and juicy pork.  For an 8 lb pork shoulder, this will take at least six hours in the oven.  Make sure you give yourself enough time.  Pumping up the heat at the end will result in a tougher pulled pork.  I have a bunch of braising tips written out if you have some additional questions.

Ok- let's get into the meat of this easy pulled pork recipe.

For the Dry Rub

For the Pulled Pork

You're going to have a lot of pulled pork.  YES!  The great news is that it freezes exceptionally well.  Go ahead and pile the pork into a freezer safe container, being sure to add in some of the pan juices.  Leave about ½" at the top of the container for expansion.  When you go to defrost, simply add to a pan over medium heat, cover with a lid and enjoy about 10 minutes later.  Tastes as good as the day you made it. 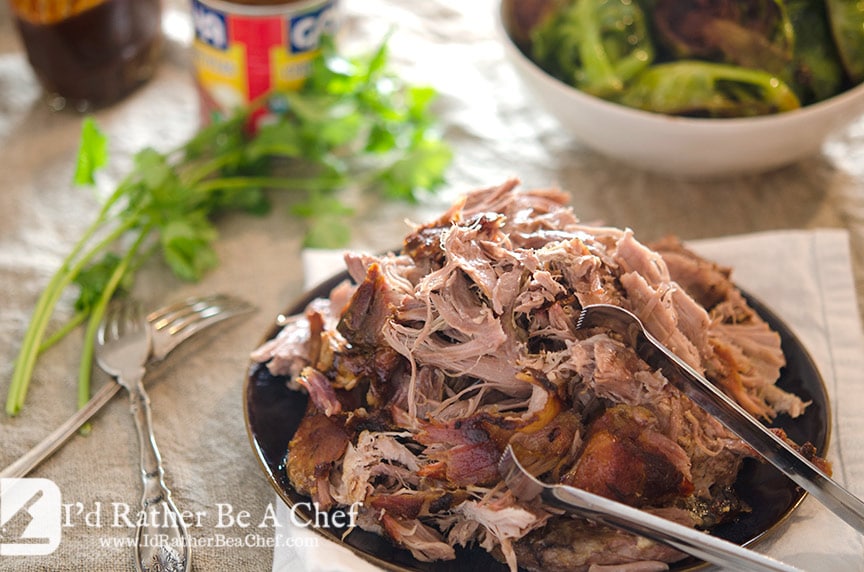 This sounds good. Something new to try as well. thanks for sharing this recipe.

Hey there:
Thank YOU for stopping by and sharing your thoughts.
Have a great day in the kitchen!
Scott

Pulled Pork Taco Recipe | I'd Rather Be A Chef

[…] the things I love so much about Mexican style food.  We’re going to be using my recipe for easy pulled pork which I posted a while ago.  We’re also going to be making some super fresh pico de gallo […]

Easy Shredded Chicken Recipe | I'd Rather Be A Chef

[…] to do something a little different than chicken?  Oh, have I got something for you.  Give this easy pulled pork recipe a shot.  It’s inexpensive and you’ll have enough pulled pork around to make pulled […]

Healthy Pulled Pork Soup | I'd Rather Be A Chef

Pressure Cooker Pulled Pork | I'd Rather Be A Chef

[…] Sometimes I forget about my pressure cooker.  It doesn’t live in my kitchen simply because space is at a premium.  My pressure cooker lives in a bank of cabinets at the top of our stairs. You know the saying “out of sight, out of mind.”  Well, it applies really well to my pressure cooker.  Recently, however, I had a bone-in pork shoulder in my refrigerator that needed to be cooked.  My days were really booked and there was just no way for me to use my easy slow cooked pulled pork recipe. […]

Low Carb Chicken Fajita Recipe | I'd Rather Be A Chef

[…] want to give these other recipes a try… Starting off with some easy guacamole, or maybe some super delicious pulled pork which is the perfect base for this awesome pulled pork taco recipe!  There are so many more […]

This (yesterday) was my first time making pulled pork! I bought pork shoulder butt from Costco (think that was the cut). I thought it was huge (13 lbs), but discovered there were two upon opening them! I decided to use your rub for one and America's Test Kitchen (Black pepper, cayenne pepper, chili powder, cumin, oregano, paprika, salt, white pepper (I omitted dark brown sugar and granulated sugar since I’m trying to stay LCHF and avoid sweeteners)) for the other. I used your technique on both (they start theirs on the grill and finish in the oven)

I do want to ask... after reading this page multiple times, it would appear that the pork should cook at 425F the entire time. However, you reference an initial blast of heat and advising not turning up the heat at the end, which makes me think the heat should be reduced after the first 30 minutes. I guessed and decided on 325F.

I think I like the America's Test Kitchen dry rub blend better, but I definitely appreciate your technique (which gave me the courage to buy this cut of meat for the first time!) I took them out 5.5 hours after reducing heat and both (baked separately) were about 209F with my trusty Thermoworks Thermapen. So, I'd probably check after 4.5 hours next time. The meat was still tender and delicious and didn't seem over-cooked at all. Interestingly, there was vastly more liquid in the pan from your rub + Adobo + cilantro.

As per ATK recommendations, I let both sit in the fridge for over 3 hours with the rubs before putting in the oven. I also covered them with parchment paper before putting the aluminum foil on. I ended up getting over 15 quarter pound servings on the first one (I weighed and separated them) and I'm going to be separating the second one (your rub + Adobo tonight).

I am thrilled to death that I made this and they came out so well that I'm thinking of going round 2 and making one for my neighbornood block Halloween party and my work Halloween boooofay. As a bonus, my VERY picky husband loved it too!

Looking forward to trying your pulled pork tacos recipe next!

Hi Laura:
Awesome- I love using both recipes side by side. You're right- I should have indicated to drop the temperature to 300 degrees... The recipe has just been updated!!
Thank you for your feedback.
I hope you have a wonderful day in the kitchen!
Scott

So I've never made pulled pork before. For years I thought it was something that was smoked. This recipe really made it easy for me put everything together for some delicious results. Up next I am going to make your Healthy Pulled Pork Soup. It just looks so yummy.

Hi Beth:
So grateful you discovered this delicious pulled pork.
Thank you for stopping by.
Have an excellent day and happy eating!
Scott