Home » Lardon: The Best Bacon Ever

Making a good lardon takes two things: just a little bit of patience and a slab of quality bacon. In this recipe, I’ll give you the secret to making lardon that are crispy on the outside and tender on the inside with flavor the whole way around. Think of these more as bacon croutons and let’s set our imaginations wild with the possibilities. 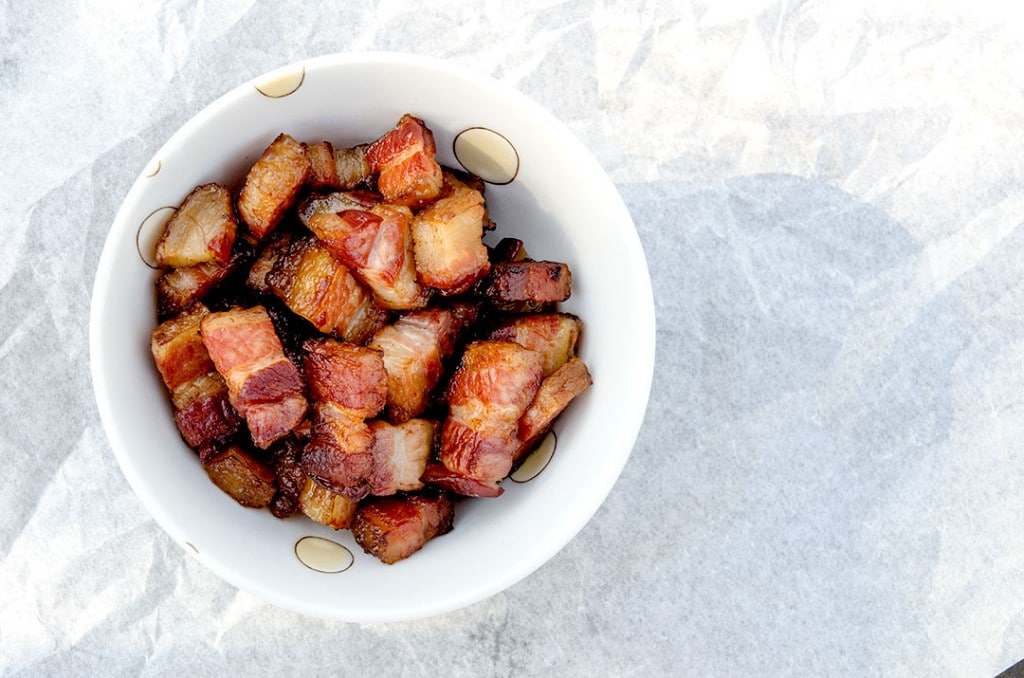 A LARDON BY ANY OTHER NAME IS JUST BACON.

Around our house, there is a quiet reverence for the lardon. Although it is made out of bacon, it simply is a different experience than just chopping up bacon into batons or bits. A good lardon is crisp on the outside and tender on the inside which is hard to achieve with any kind of pre-sliced bacon. To make our lardon, we’re going to need to find some slab bacon first. Then we’re going to slowly render out the fat over low heat. While the fat renders, the bacon will start to brown to a crisp, delicious cube.

My kids know when I’m cooking the bacon lardons and hover around the kitchen island. They quietly eyeball the pan to gauge when the lardon will be ready so they can be first in line. I typically always put any extra into a bowl on the counter and they disappear within minutes. They are almost irresistible so I grab a couple too.

WHAT IS A LARDON?

The technical description is as follows: A lardon is a strip or cube of either uncured pork fat or salt cured pork.

Let’s break this down-

Fatback & Pork Belly: Fatback is a firm fat that can be used in a number of different ways for cooking. I use fatback for making sausage and have never used it for lardons. Next time I pick some up, I’m going to give it a try. The pork belly is where bacon comes from. It has softer fat and the delicious meat that we love to eat.

Salt Cured Pork:  This is pork belly that has been cured in salt rather than being smoked to make traditional bacon. I’ve used salt cured pork in the past and unless it is boiled first, it is just so salty that I find it inedible. I suppose that you could find salt cured pork (typically it is in the freezer section near the sausage), boil it, slice it and make some good lardon but it just seems like a lot of work.

Uses of Lardon: More often than not, the lardon is not only used for it’s crunchy salty flavor but for the rendered fat as well. I’ve got a recipe for the most delicious frisee salad where we will make a gastrique from raw honey and vinegar that gets mixed with the rendered bacon fat. It is outstanding! On the same salad we’ll put a poached egg, the lardon and maybe some crumbled goat cheese. Yum.

Lardon’s can also be used in Slow Cooker Coq au Vin, quiches, omelettes, as a pizza or baked potato topping. Dunk them in some dark chocolate for a particularly yummy dessert option. Not a chocolate fan? Dunk them in maple syrup and bake them for 30 minutes for a great after-dinner nibble.

At my cooking school, we made bacon lardons frequently. I called them bacon croutons back then and we gratuitously sprinkled them onto our wedge salad with homemade blue cheese dressing. People would often ask me why we weren’t using pork belly for the lardon. It’s a good question, so I’ll do my best to answer.

Pork belly is delicious, but it doesn’t have much flavor on its own. Usually pork belly needs to be brined for a couple days to start developing yummy flavors. If you were to just render a piece of pork belly in a pan, you would notice that it doesn’t taste all that good and gets quite tough. Pork belly likes to cook slowly and meld with other flavors.

On the other hand we have bacon, which is just cured and smoked pork belly, that is already infused with flavor. My suggestion is to talk to your butcher and find the bacon which has a very light smoke to it. For lardon, typically I avoid any applewood or maple smoked bacon. The smoke flavor is too strong and takes over the dish. With lightly smoked Amish bacon, like the kind I buy locally, the flavor is delicate and slightly salty. Find a slab of similar bacon and we’re off to the races.

QUICK COOKING TIP: Finding slab bacon might take a minute. If you know of a good local butcher or a high-end grocery store that is slicing their own bacon, give them a call before heading out to see if they have any on hand. If they do, ask for a pound to be set aside for when you arrive. In Cleveland where I am at, you can find slab bacon at Miles Market, about 5 vendors at West Side Market (I buy all mine from DH Whitaker), Whole Foods (call ahead) and some of the Giant Eagle Market District stores (again, call ahead).

FINAL THOUGHTS ON THE LARDON:

Bacon tastes good. Slow cooked, super thick cut bacon croutons taste incredible. Take a minute to find some slab bacon locally, slice it up thick and give it some time to cook down. You’ll love it and will find a whole slew of new ways to use these bacon croutons in your kitchen.